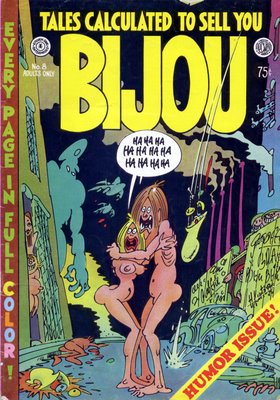 In my opinion, the Harvey Kurtzman comic book issues of MAD are probably the funniest things ever put in print. In their heyday, all of the other comics companies seemed to agree as they imitated the lampoon formula shamelessly only often without much of a sense of humor! For a time, I collected the MAD rip-offs--WILD, CRAZY, RIOT and a dozen others! The problem became so prevalent that EC began running ads warning readers against imitations other than their own, fully authorized imitation, PANIC.

In the sixties, along comes a whole generation of comics artists whose minds had been warped….err, I mean influenced by MAD (see early issues of BLAB for an oral history of MAD’s influence on undergrounds). They didn’t aspire to draw DAREDEVIL or AQUAMAN, they wanted to create satire and parodies and change the world the way Kurtzman inadvertently did. In Chicago, Jay Lynch, whose early cartoons had appeared in Kurtzman’s later HELP magazine, founded BIJOU FUNNIES in the wake of the success of ZAP in San Francisco.

BIJOU’s core crew consisted of Lynch, Skip Williamson, Jay Kinney and Robert Crumb himself. Beginning in 1968, the vast Bijou Publishing Empire (sic) put out eight issues of BIJOU FUNNIES over a period of six years, the later ones distributed and kept in print by Denis Kitchen, a sometime cartoonist himself but better known for his publishing contributions.

Spotlighting Lynch’s signature strip, NARD ‘N’ PAT about an Andy Gump-like man and his anthropomorphic cat with an attitude, Bijou also presented a wide array of strips and artists in its first seven issues (as well as in a few spin-off titles), many of which were collected in the book, THE BEST OF BIJOU FUNNIES in 1975 along with a history of the whole publishing venture.

Issue eight of BIJOU, however, was something special. For perhaps the only time in underground history, Lynch decided to go all out with the MAD influence. First of all, issue eight was printed in color at a time when nearly all undergrounds were in black and white. The cover was not only designed to be reminiscent of the original MAD’s layout but Harvey Kurtzman himself was recruited to do the illustration (I always thought it looked more like an unfinished thumbnail, myself, but, hey! It’s Kurtzman so I’m not kicking!) On the inside, various underground artists were instructed to do parodies of famous underground strips by others. The results were, for the most part, inspired. 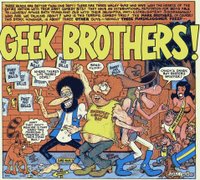 Lynch is up front with a dead on parody of Gilbert Shelton’s FREAK BROTHERS (as well as FAT FREDDY’S CAT), smoothly drawn but with lots of Elder-style chicken fat in the backgrounds. Even WONDER WARTHOG gets a cameo.
Bil Stout’s very MAD-like parody of Williamson’ s SNAPPY SAMMY SMOOT (as SNAZZY MELVIN SNOOT!) is next and the artist seems to channel both Elder and Wally Wood.
Williamson himself appears next with his Crumb lampoon, MELVIN NATURAL. Crumb gets his own digs in later on with a spot on version of Lynch’s NARD ‘N’ PAT. Other artists appearing and desecrating other sacred underground cows include Kitchen, Kinney, Bill Griffith, Willy Murphy, Kim Deitch, and Cincinnati’s own (these days anyway) Justin Green. Other characters parodied include the checkered demon, the toad, Zippy the Pinhead, Trashman and 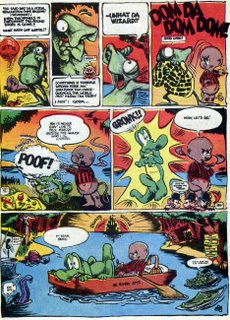 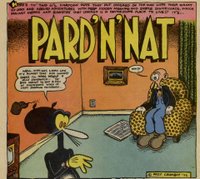 Chuck.
The highlight of the issue, though, has to be the parody of Vaughn Bode’s CHEECH WIZARD by one Pat Daley, an artist I had never heard of then or now. With absolutely beautiful art and a lot of attention given to parodying not just content but design and layout style also, it works its way, in true MAD style, to the very twisted ending seen here.
Finally, the back cover offers an

extremely amusing and clever variation on the ads EC used to run about MAD rip-offs. Former Wally Wood assistant (and an underrated cartoonist in his own right) Ralph Reese showcases no less than 32 underground titles in ad showcasing BIJOU FUNNIES as the real thing. Unfortunately, issue eight, probably my all-time favorite underground, turned out to be the final issue of BIJOU FUNNIES.
The now legendary Jay Lynch can be found on the Web at: Jay Lynch.
Posted by Booksteve at 9:14 AM