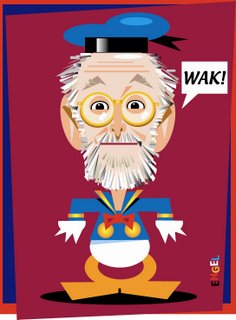 In recent years, with mainstream comics continuity becoming more and more convoluted, I find that the only comics I still tend to collect on any kind of regular basis are the very comics I avoided in my actual youth—Disney comics. This is all Don Rosa’s fault.

Just as earlier generations discovered the great Carl Barks as "the good duck artist," I first paid attention to UNCLE SCROOGE when longtime fan artist Don Rosa, then semi-retired into

the family business, decided to take at least one crack at writing and drawing a story featuring his all-time favorite characters in 1986. That one story changed Don’s life and while my fellow Kentuckian may still be able to walk the streets of Louisville unrecognized, he has long since become like unto a god in parts of Europe where Disney comics have long been revered as fine art.

in the pages of the RBCC, the ROCKET’S BLAST/COMICOLLECTOR, the fanzine where he had just taken over a question and answer column started by Ray

Miller. According to the RBCC, itself, several folks had been finalists for the position, one of whom was an old friend of mine named Steve Conner. Don, though, was not only a fount of trivial information but clung fast to my oft-stated tenet that the secret of life is not knowing all the answers but knowing where to look them up! His INFORMATION CENTER column was uniquely illustrated not just by Don’s cartooning but by little effects such as paragraphs curling out and drawn word balloons announcing the various sections. It quickly became the favorite section of the magazine and expanded accordingly as Don was inundated with questions. He even opened an IC Annex in the tabloid pages of COMICS BUYERS GUIDE. 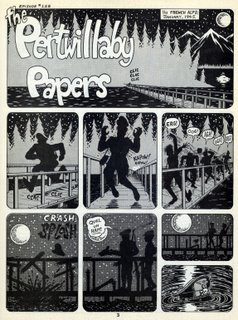 The RBCC even began printing first old and later brand new adventures of Rosa’s original series, THE PERTWILLABY PAPERS. Lancelot Pertwillaby, looking much like the artist himself, was an oblivious, intelligent dogooder who, along with his platonic girlfriend Feather Fluff, became involved in adventures inspired by the great quests Carl Barks wrote for his classic Disney Duck stories. LOST IN (AN ALTERNATE SECTION OF) THE ANDES was Rosa’s direct homage to his own artistic hero. Already an accomplished storyteller, Don’s work, in which he did all of the writing, art and lettering himself (his lettering being an integral part of his overall style!) was not just amusing but out and out laugh out loud funny. That said, his stories were also genuinely exciting and well-paced. Again, a tribute to the influence of Carl Barks and his Scrooge McDuck adventures. 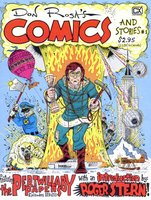 His layouts could be Eisner-inspired but his often insanely detailed art was reminiscent of both Kurtzman’s MAD and the burgeoning undergrounds of the early seventies. A decade later, during Don’s "retirement" from comics, these stories would be collected by Fantagraphics in several magazine-sized issues of DON ROSA’S COMICS AND STORIES.

By 1976, Don had enough clout to, along with RBCC editor Jim Van Hise, put on OMNICON,

a major science-fiction/STAR TREK/comics convention in Louisville, Kentucky that I attended. From a fan’s point of view, it was a big success (I met my first TREK star, De Kelley) but I’m told it was a draining, straining experience for all involved behind the scenes, perhaps especially Don. After continually overextending himself, Rosa was forced to cut back, leaving smaller sections of questions in IC and often leaving the illustrations to others such as Eddie Eddings. Even the final PERTWILLABY PAPERS story was left unfinished. When the venerable RBCC folded, Don’s strip (reprints) and his column turned up again in THE COMIC READER, then being run quite nicely by the folks at Street Enterprises who had previously brought fans the ultimate comic strip newspaper, THE MENOMONEE FALLS GAZETTE. In the late seventies, though, Don finally made a stab at being a professional cartoonist with the one and only…CAPTAIN KENTUCKY!
Continued… (Special thanks to DICK DUCK, DUCK DICK cartoonist Jim Engel for letting me print his computer portrait of his friend Don!)
Posted by Booksteve at 11:59 AM