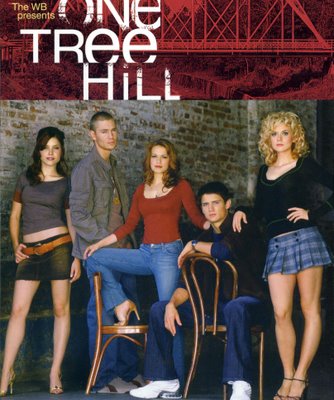 Perhaps surprisingly, one of my recent obsessions has been a current, sports-related television high school drama aimed directly at viewers about three decades younger than myself. Once again, my young friend Kim is responsible for bringing it to my attention after I had previously written it off sight unseen (as I’m now sorry to say I’ve done with many similar series in the last few years). Good writing is good writing and when you have creators who care passionately about a show, it shines through and resonates with all ages.

ONE TREE HILL is, on the surface, the soap opera story of two half brothers, Lucas and Nathan, both of whom are excellent high school basketball players in the small North Carolina town of Tree Hill. Lucas was raised by a loving single mother and Nathan by his rich, successful but not very caring parents. Although they grew up separately, they share a common father in Dan Scott, perhaps the most manipulative, mean-spirited, egotistical and downright evil prime time villain since JR Ewing.

The gist of the series plot is that Dan wants the son he raised to be the basketball star he himself had been but the son he denied may well keep that from happening. Around that basic premise, the plots of the series go in all different directions from deep heart-wrenching drama to light-hearted fun, continuing subplots from one episode to the next in traditional serial fashion. There’s a generous helping of sex and a good dose of comedy but what keeps me coming back is the writing and the performances(and yes, I know the writing sometimes takes shortcuts such as when Nathan is emancipated from his parents virtually off-camera in a single scene instead of the prolonged legal issues that would have entailed in real life but then Bobby Ewing's shower scene comes to mind as a precedent for shortcuts.)To a man, the actors quickly find and refine their roles straight out of the gate with no one being totally cliched. They then continue to humanize their characters as the series goes along. The stuck up cheerleader turns out to be a sad and lonely artist with major personal issues, the "easy" cheerleader is revealed to be secretly nice and deeper than expected, the nice guy uncle has a drinking problem, the bad guy occasionally does something nice and even Lucas and Nathan subtly switch roles throughout the first season.
The actors fit these roles to perfection, too, starting with Chad Michael Murray as the brooding Lucas. Big, handsome Paul Johansson smiles in a suitably creepy way when he puts down his son or tells off his wife or undermines the coach or just generally exudes trouble.
ONE TREE HILL plays its adult characters off of the teens, paralleling the modern day high school travails with backstories of the way things were when THEY were attending high school. Barry Corbin’s Coach character acts as a bridge between the generations. In fact, for a show set in a high school, he is surprisingly the only school authority figure even seen!
Another aspect of the show worthy of comment is the music and how well it's been integrated into each episode. I’m on record as not being a fan of much modern music but here the producers have done a beautiful job of choosing and displaying the songs. The lyrics always fit the scenes and the music always fits the mood of the episodes. Many episodes are, in fact, named after song titles and feature montages of all the characters set to music. Since BUFFY began doing this sort of thing, the incorporation of songs into series has become fairly widespread 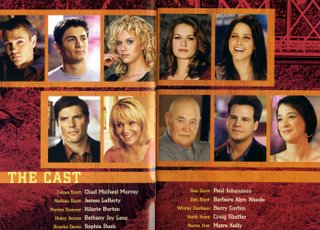 but I’ve never seen it done as well as here. In fact about the only aspect of the show that I can quibble with is that it's set in North Carolina, where my mother came from and where I visited every summer as a child...and yet no one seems to have a Southern accent!
Actually, the first season is pretty much all I can comment on right now as we’re watching it on DVD. Once (or sometimes twice) a week lately, I get together with Kim and we do a mini-marathon of episodes. We’ve just started season two. In the real world, season four is coming soon. If, like me, you might think you’re too old, think again. It may be done up in modern dress but this is a good old-fashioned entertaining prime time serial. Don’t say there’s nothing good on TV anymore when you have shows like ONE TREE HILL. Try it yourself. Thanks, Kim.
Posted by Booksteve at 1:40 PM