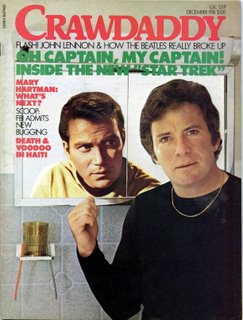 Seems like William Shatner (apparently now AKA "The Shat!") is everywhere these days (looking vaguely oriental from perhaps too much plastic surgery). From BOSTON LEGAL to commercials to a new STAR TREK video game to an upcoming TV roast, there’s no doubt he’s working more than ever here in the twenty-first century. This issue of CRAWDADDY from late1976 highlights the STAR TREK phenomenon and gives one of the most comprehensive early looks at the proposed feature film that would not materialize until three years later. "Can STAR TREK be put back together?" the article asks, illustrated appropriately by the image of a suitably seventies looking "Shat," as seen below.
Series creator Gene Roddenberry and sci-fi curmudgeon Harlan Ellison (credited with writing the series’ most popular episode and an early writer for the film version) discuss the aborted "Kirk meets God" concept. Although it was later used in revised form in the Shatner-directed STAR TREK 5, Roddenberry’s widow Majel had Gene’s original concepts novelized about ten years ago.That book was never released though. Reportedly Majel was unhappy at the novelizing author’s (was it Vonda McIntire?) final version due to some inappropriate jabs at Roddenberry himself. It got so close to being released that it’s still listed on the computers at certain bookstores but it was actually pulled at nearly the last minute.
Shatner points out that Paramount initially had no interest at all in the original cast and instead wanted big stars for the roles. He speculates that Richard Burton might have played Kirk and Robert Redford as Spock!
In a rare instance of missing the obvious, Ellison is quoted as saying that CRAWDADDY’s piece on STAR TREK was already out of date as Trek-mania had run its course. Shatner, on the other hand correctly predicted the continued interest in the franchise. He added that if the fil 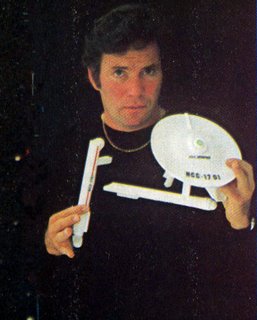 m were a blockbuster, the public could expect more films down the line and that if it were only mildly successful, a new TV series. In reality, of course, we got both! In 1979, after various false starts, STAR TREK: THE MOTION PICTURE was finally released in theaters.
STAR TREK’s Chekov, Walter Koenig (a very perceptive man whom my wife and I met a few years back) gets in the article’s last word when he says, "Better STAR TREK influencing society’s different levels in a very big way than something else, something like KOJAK!"
Posted by Booksteve at 11:15 AM