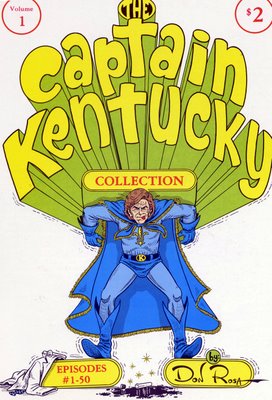 In 1979, Keno Don Rosa hit what he might well have presumed to be the big time when the Saturday Magazine Section of THE LOUISVILLE TIMES offered him the chance to do a weekly comic strip. Dusting off his longtime hero (and alter ego) Lancelot Pertwillaby, Don placed him now as a reporter who, due to the usual radioactive accident (which in real life would have, at best, horribly mutilated Lance), becomes super hero CAPTAIN KENTUCKY!
150 episodes of CAPTAIN KENTUCKY were published over a three year period, each in a two tier format (similar to STAR HAWKS but better utilizing the space!) in which the writer/artist/letterer filled as much space as possible.

Although the strips themselves offer sometimes subtle social commentary in the midst of silly stories and action-filled adventures, Don began inserting more personal comments in between the panel borders as "C.K.’s pre-decoded secret messages." These often controversial one-liners would come to tick off the folks at the TIMES and sometimes even be deleted prior to publication.
CAPTAIN KENTUCKY, for the most part, lived up to the very definition of a regional comic strip as it satirized local Louisville politicians, anchormen, DJ’s, the Kentucky Derby and anything and everything related to the Commonwealth. The plots got more and more complicated, convoluted and tied in to their specific region. Much of this would be thoroughly unintelligible to non-Kentuckians. Even us Northern Kentuckians lost out on all of the specific local references. At the same time, though, every major city has wacky reporters and crazy politicians so there was at its heart a kind of universal appeal to the whole thing. 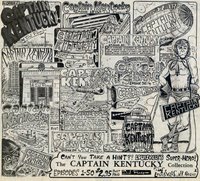 Some of the most memorable aspects of the entire run are the ever changing SPIRIT-like logos, a few of which are seen here in this ad for

the CAPTAIN KENTUCKY reprint books.
Among the folks appearing in the strip are former TV star Roger Davis (ALIAS SMITH AND JONES, DARK SHADOWS) who was then a real estate developer here in Kentucky, former heavyweight champ Muhammad Ali and radio personality Gary Burbank who soon after settled in at Cincinnati’s WLW. Years later, Gary Burbank bought something in my store (with a credit card so I know his real name but he swore me to secrecy! SSSHHH!) I asked Burbank if he remembered the CK strip appearances and he assured me that he got more name recognition from it than he ever got from his radio station down there at the time. He said he wished he had a copy of the strip reprint books and I referred him to the local comic shop (don’t know if he went).
Three volumes of magazine sized CAPTAIN KENTUCKY reprints followed, self-published by Don over several years whenever, as he put it himself, "the loan for the previous issue is paid off.". In 1984, plugging these and the previously mentioned DON ROSA’S COMICS AND STORIES, Don was interviewed by Lou Mougin for David Anthony Kraft’s magazine, COMICS INTERVIEW. In perhaps the longest interview I’ve seen with the artist, he discusses his own legendary comics collection, his artistic influences (Barks, et al), Omnicon and his own strips. He is incredibly self-deprecating in spots, calling his art just "a hobby" and pointing out that his family didn’t appreciate it. The Don Rosa who did this interview and referred to himself as a cult artist would undoubtedly be skeptical of what was about to happen to his career… CAPTAIN KENTUCKY in a hardcover, slipcased edition in Europe!!??
To Be Continued
Posted by Booksteve at 9:58 PM