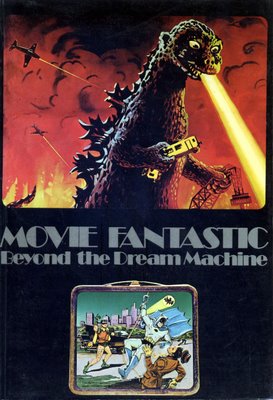 From the cover of MOVIE FANTASTIC-BEYOND THE DREAM MACHINE, you’d never know that it was a serious work of cinema history. Not only do we have a rather simplistic bit of Godzilla poster art but also a totally incongruous TV Batman lunchbox, giving the distinct impression that the book is going to be a kids’ pop culture puff piece!
Inside, however, this 1974 release is divided into four sections-Myths, Machines, Visions and Nightmares. With a wealth of uncensored rare drawings and photographs, author David Annan covers international cinema’s obsession with fantasy from the silent days of George Melies through KING KONG and DRACULA and on into Jean Rollin’s then contemporary lesbian vampire films. He attempts and often succeeds to put them into a real world context, touching on everything from cave drawings and Native American legends to specific movements in traditional cinema.
A bit pretentious, the text is really little more than a long essay on fantasy in film history, livened up by an eclectic mix of rare and iconic film stills you aren’t likely to find anywhere else.
MOVIE FANTASTIC-BEYOND THE DREAM MACHINE was part of a film book series originally published, I believe, in the UK but distributed in part in the US through the late seventies. Other titles included KUNG FU, CINEMA OF VENGEANCE, SAVAGE CINEMA, ITALIAN WESTERNS-THE OPERA OF VIOLENCE and CATASTROPHE-THE END IN THE CINEMA. Annan's book has been reissued several times since under different titles, also.
Posted by Booksteve at 9:06 AM