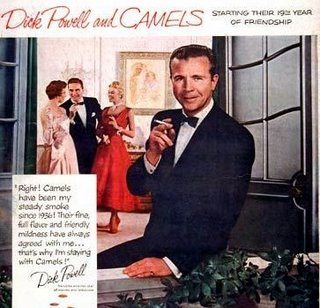 Awhile back I went on a bit about my newfound admiration for my mother’s favorite actor, Dick Powell, and in particular his radio series, RICHARD DIAMOND. Lately I’ve found myself enjoying an earlier Powell series, ROGUE’S GALLERY. Richard Rogue preceeded singing detective Richard Diamond by a few years but in essence, Powell exploits his latterday image as a charming, cynical tough guy in both. The conceit of ROGUE’S GALLERY is that the detective tends to get knocked out a lot—about once per episode—and when he does he wakes up on "cloud 8" where he inevitably meets his cackling "alter-enemy," Eugor (spell it backwards). Eugor taunts him and needles him but more often than not points him in the direction of some heretofore missed clue that leads to the dénouement of the case at hand. The episodes I’ve heard are all sharply written with clever mysteries and with solid performances from Powell (in spite of a number of minor flubs that lead me to think the episodes may have been underrehearsed). Lots of other familiar radio voices appear including Gerald Mohr(Mister Fantastic on the 1967 FANTASTIC FOUR) and my friend Bob Hastings.
Radio historians note that the show ran on without its star when Powell left to do a series adapting THE FRONT PAGE but that the character became "very different."
In 1968, a TV movie/pilot was made starring Ann-Margret’s husband Roger Smith along with a good cast of veterans including Brian Donlevy, Farley Granger, Edgar Bergen and even "poor old Johnnie Ray." I could be wrong but it seems to me like it had sat on the shelf a few years before actually running. It never sold as a series. Smith may have been good but Dick Powell was Richard Rogue…and Richard Diamond. If you get a chance, check out some episodes!
Posted by Booksteve at 11:36 PM