Movies That Fell Through the Cracks # 16 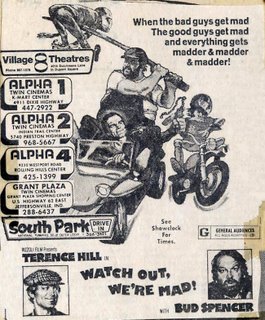 Italian actors Mario Girotti and Carlos Perdersoli have teamed in almost twenty light-hearted movies since the mid-sixties. Nearly all of them were huge international hits. Maybe you know them better as Terence Hill and Bud Spencer. I first encountered them in the comic spaghetti western, THEY CALL ME TRINITY which was their only major splash in the US market. TRINITY IS STILL MY NAME was released a few years later and endlessly double-featured with the original. Needless to say, the greedy US market wanted more so anything the duo touched was dubbed and touted as "starring those ‘Trinity’ boys!" There was a collective sigh from the US market.
Such was not the case in Europe and elsewhere, however. After teaming with screen legend Henry Fonda in Sergio Leone’s production MY NAME IS NOBODY, the handsome, ingratiating Hill in fact became so popular that major film producers cast him in MR. BILLION opposite Jackie Gleason and MARCH OR DIE opposite Gene Hackman. This is when the not too swift US market found out he had an Italian accent in real life. Having lived in the US for nearly a decade by that point, the clever actor took his international box office receipts and opened his own film studio here where he turned out profitable small scale films such as SUPERFUZZ.
In the meantime, there were still films with Bud Spencer to be exploited and one was 1974’s 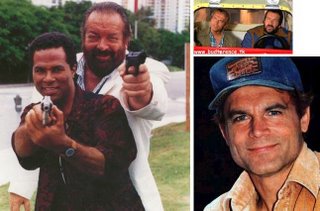 WATCH OUT, WE’RE MAD, a modern day comedy (with dune buggies!) in which the car racing pair outwit gangsters (and English actor Donald Pleasance) at every turn. As always, Spencer was the giant, bull-headed, soft-hearted tough guy and Hill the devilish, good-looking, unflappable hero. The longtime friends were usually cast as brothers, rivals or both but always worked together in the end. To read the reviews on IMDB, WATCH OUT, WE’RE MAD is either the best or worst thing the pair ever turned out. I wouldn’t know. It only played drive-ins around here so I missed it as I was too young to drive.
Spencer went on to star opposite MIAMI VICE’s Phillip Michael Thomas in the title role of the EXTRALARGE series while Hill became the personification of the comic strip favorite LUCKY LUKE in a series of Trinity-like TV westerns. There’s still about twelve of their film team-ups I’ve yet to see but given the chance, I’ll catch them whenever possible. Terence Hill and Bud Spencer have a great, fun chemistry on-screen no matter what the vehicle. In fact, I’d have to say that they rank as one of the great unsung comedy teams of movies!
Posted by Booksteve at 7:18 AM