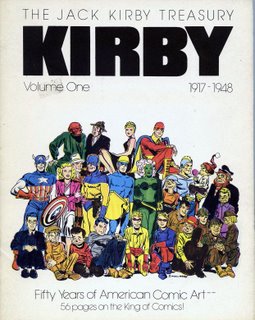 Sadly, my new work schedule leaves me little time for extensive posting lately. I’m going to try to write ahead on my days off and cache some good stuff. In the meantime, I’m postponing Part 3 of my Don Rosa piece until mid-week so as not to rush it. That’s okay though as the ever-vigilant Mark Evanier reminds us all that today would have been Jack Kirby’s 89th birthday. I don’t think it’s an exaggeration to say that pop culture as we know it would not exist if not for Jack Kirby. Those modern superhero artists who haughtily deny that Kirby had any influence over THEM are just too dense to see it. It reminds me of the oh-so-hip rock bands who deny being influenced at all by the Beatles…until you point out all of the specific comparisons.
Jack Kirby was the first comic book artist whose name I knew, the first whose work I actively sought out, the first whose artwork I studied and copied, the first I followed from book to book, the first whose imagination seemed boundless, the first I bought books and fanzines about, the first…well, when it comes to comics art, Jack was probably the first in just about everything!
Kirby’s work in comics was always underappreciated by everyone except his fans and yet its influence endures. Kirby’s style and concepts can be seen daily in the works of the most popular film and TV writers and directors. Recycled, it also influences toys, fashions, books and most 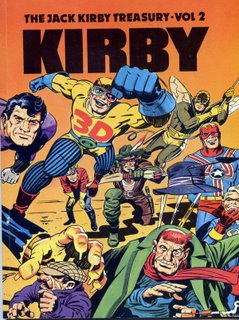 especially video games.
I’m on record with my story of nearly knocking down Kirby the only time I ever actually saw him in person. I have no doubt that he would have simply gotten back up and created something amazing from some miniscule aspect of the event that you and I can’t even see now! We miss you Jack but—and we’re not just saying this—you are most definitely still here with us!
The illustrations here are the covers of THE JACK KIRBY TREASURY, vols. 1 and 2, published, respectively, in 1981 and 1992 by Jack’s friend and latterday collaborator Greg Theakston. Packed with little seen art and info, they act almost as a precursor to Twomorrow’s obsessive THEJACK KIRBY COLLECTOR, a regular magazine analyzing all aspects of Jack’s life and career as befits a true, historically important "King."
Posted by Booksteve at 11:19 AM