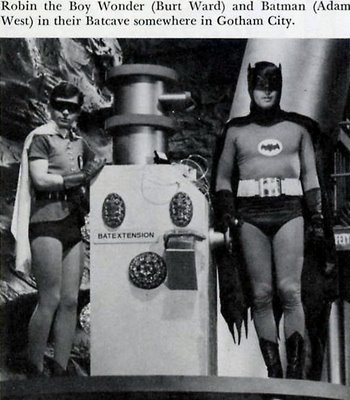 The book FADS, FOLLIES AND DELUSIONS OF THE AMERICAN PEOPLE by Paul Sann came out in 1967. Timing wise, the book couldn’t possibly be left to deal with Davy Crockett, Dianetics, Mah-Jong or flagpole sitting until it got the biggest craze of the day out of the way--Batmania. Thus, its long opening chapter is all about BATMAN and features some fascinating, controversial quotes from Bob Kane and the producers of the hit TV series. Entitled BATMAN: GALAHAD IN A CAPE, the piece starts with a long section about the thousand or more complaining phone calls ABC received in March of 1966 when they pre-empted portions of a Batman vs. Catwoman episode for news bulletins on the unfolding crisis with the spacecraft Gemini 8. Two astronauts (including future first man on the moon, Neil Armstrong) were nearly killed when their vehicle accidentally fired a rocket booster causing them to spin out of control. Three to one, American television viewers would have preferred BATMAN.
Bob (what DID he really have to do with the creation of Batman anyway?) Kane is then lionized with a biographical section focusing on his supposed influences. These include the usual suspects of Da Vinci, Mary Roberts Rinehart, Zorro, the Shadow, Superman but also, it says here, The Green Hornet. Sann points out that Kane’s original "Birdman" character became "Batman" and debuted "quietly among the assorted offerings of the pulp DETECTIVE COMICS." It says he wore " a clumsy pair of attached wings in those days." Kane is quoted as describing his bread and butter character as "just an average millionaire out there fighting master criminals."
Sann then attempts, as have many in years since, to piece together the 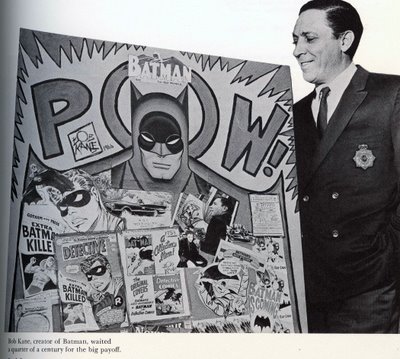 elaborate route via which the Caped Crusader became one of the biggest crazes of the sixties. Beginning with Susan Sontag’s 1965 declaration that Batman was "low camp" and noting the NEW YORK TIMES’ reversal that declared him "high camp," the "twin viruses of pop art and camp" collided. Batman and Robin began appearing in Pop Art including giant blow-ups at the San Francisco Ballet. Hugh Hefner’s revival of the BATMAN serial from the early forties is also cited. In fact, the actual creation of the TV series seems almost an afterthought according to this book!
After only one long paragraph describing the series itself and its stars and villains (including Otto Preminger as "Professor Egghead, also known as Mr. Freeze."), we get into a much biigger section discussing the psychological and even political ramifications of BATMAN. Bestselling psychologist Eda LeShan said, "To adults the whole thing is a delicious joke; from the safety of their maturity, they look back with amusement on the hero of their youth. Children, on the other hand, particularly younger children, take the whole thing very seriously. For them, the experience can be very confusing."
A Dr. David Singer from Duke University said that adults were "tuning in to laugh at themselves because the super hero they had turned to in the 1940’s out of their own childhood insecurities had now become so ridiculous."
PRAVDA, the Soviet newspaper, weighs in with their comment (having apparently never seen the series at all) that Batman is "representative of the broad mass of American billionaires who kills his enemies beautifully, effectively and with taste, so that shoulder blades crack loudly and scalps break like cantaloupes."
Series producers William Dozier and Howie Horwitz note that Adam West’s perfectly 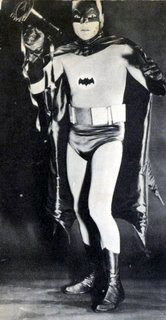 straight, serious delivery was what made things work so well. "As soon as Adam thinks he’s funny," says Horwitz, "we’re dead."
Dozier adds that he doesn’t care for the word "Camp," often used to describe the series. "It sounds so faggy." This line of thought gets the author to dredge up comics’ favorite whipping boy, Dr. Frederic Wertham. In his damning 1954 book SEDUCTION OF THE INNOCENT, Wertham made the celebrated case for Batman and Robin as "…a wish dream of two homosexuals living together."
Back to Bob Kane for rebuttals. "Batman is the epitome of virility and manliness—just the opposite image of the fag." "Wertham read homosexuality into this thing because I had a man and a boy living in a big house together—in the same bedroom—with just a butler and no female around. The doctor read homosexuality into it, through his eyes, but for that matter he also put down the WONDER WOMAN comic as a lesbian invention." "It was all hogwash but I had to do something about it anyway. So I changed their bedrooms and I added Aunt Harriet—sort of a mother to both of them." Thus sayeth Kane but…was Aunt Harriet added in the comics prior to the TV series? Certainly Kane who was NOT the writer (or the artist for that matter but that’s a whole other can of worms) would not have been the one to add the character anyway. 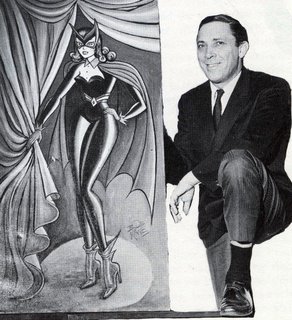 Bob’s final word on the subject? "Even so, I suppose the homosexuals like the TV show because of those tight outfits Adam west and Burt Ward wear. I imagine they sit around watching them on the screen and slap each other on the knees with the sheer joy of it all, but what can you do about that? I can’t change the characters because they weren’t homos in the first place and because you have to be crazy to fight success."
Sann adds "The esoteric quarrel over the sexuality of the new TV heroes had little impact." He notes the success of the revived BATMAN newspaper strip and adds, "What editor of a red-blooded American daily would buy an adventure strip with a homosexual theme?"
Although they were products of their time and may well have changed their opinions on things in later years as many did, Bob Kane chose to ignore the issue all together in his own 1989 autobiography. It certainly makes you wonder what Kane and the series’ producers would have thought about the all new BATWOMAN, doesn’t it? Finally, I can’t help but wonder why author Sann chose that particular photo of the Caped Crusaders to illustrate this section. Seriously. "Bat-extension????" Was that really necessary?
Posted by Booksteve at 9:37 AM