Movies That Fell Through the Cracks # 17 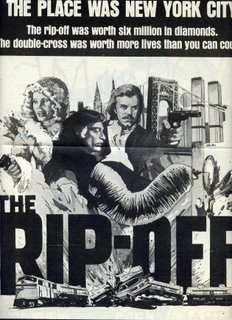 THE RIP-OFF (aka THE SQUEEZE, not exactly a better title) is a 1978 "all-star" caper film about a retired safecracker (steely eyed Lee Van Cleef) helping a friend with the proverbial one last job. Produced by Sophia Loren’s husband, this was an international co-production shot mostly in New York City. The supporting cast included cross-eyed Karen Black, here nearing the end of her fifteen minutes and sleepy-eyed Edward Albert. Oddly enough, although he never caught on in this country, Eddie Albert’s son was once quite the star in Europe, just like Van Cleef! After toiling for years in Hollywood westerns, a couple of appearances in Italian westerns made Van Cleef a worldwide movie hero and leading man but NOT in the US. Van Cleef, though, by the time of this film, had become more a cult figure than an actor. A couple of years on he would return to the US on television’s THE MASTER where, as a retired Ninja teaching a teenage boy, he lost a lot of his stature. He would continue to play welcome supporting roles until his death at the end of the eighties. Albert is still working today, appearing most visibly in a number of POWER RANGERS episodes early in the new century. Ms. Black was revived by Rob Zombie for his first gorefest but has done little to capitalize on that. Also in the cast of THE RIP-OFF were the always enjoyable gravely voiced Lionel Stander and, perhaps surprisingly, Alan Alda’s dad, Robert, himself once a good size star in the Hollywood firmament.
Posted by Booksteve at 9:10 AM