Forgotten TV Series From the 1970's 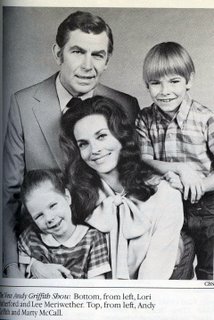 Today, we offer a brief look at some forgotten TV series of the 1970’s. They weren’t necessarily good…or bad for that matter, just forgotten. These are not likely to turn up in special complete series sets at Best Buy next Tuesday or any Tuesday in the foreseeable future. Even if you’re old enough, how many of these also-rans do you remember?

THE NEW ANDY GRIFFITH SHOW was created in a hurry in 1971 to get rid of the unpalatable flavor of THE HEADMASTER, the dreadful 1970 dramatic series Griffith did after abandoning Mayberry to Ken Berry. The scrambling attempt to salvage its star’s folksy image didn’t really help. Andy was cast here as the mayor (and coincidentally former sheriff) of a small Southern town, married to ever-gorgeous Lee Meriwether who had played his wife in the 1969 movie ANGEL IN MY POCKET. They were doing everything they could to make you think of the old days (I could be wrong but I seem to recall that Don Knotts was even brought in as a guest star in the first episode). Although I can’t imagine they took the time to audition kids, the two here came from somewhere and then apparently returned there when the show was quickly canceled and replaced with reruns of…THE HEADMASTER! Andy would flounder through several more attempts at series (including SALVAGE ONE and the great but stillborn ADAMS OF EAGLE LAKE) before settling in for a long and popular run as MATLOCK.


MISS WINSLOW AND SON was a controversial 1979 sitcom in which popular (and cute!) 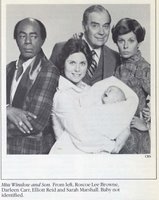 TV actress Darleen Carr played a young but unwed mother. Now you’ve got to realize just how much of a no-no this was on TV in those days. Oh, I know SOAP had already premiered and broken dozens of taboos but this sort of thing still wasn’t discussed on polite sitcoms like this one! Once you got beyond the buzzworthy concept, however, this was a fairly pedestrian comedy. Carr had grown up on TV appearing as a regular or semi-regular in many series. She was, for example, Karl Malden’s daughter on THE STREETS OF SAN FRANCISCO and Henry Fonda’s on THE SMITH FAMILY (where her brother was Ron Howard). The impressive supporting cast included radio/TV/film veteran Eliott Reid in his only regular TV role, Sarah Marshall, the daughter of actor Herbert Marshall and, rounding out the cast, the great Roscoe Lee Browne. Browne would soon replace Benson on SOAP when television showed that it still preferred not to have nice girls doing this sort of thing and cancelled the series quickly.

was produced in 1975 by Irwin Allen, here going back to the source material that had previously led him to do LOST IN SPACE. TV vet Marty Milner starred with a professional cast that included Cameron Mitchell (who had just about the most varied career of any actor ever!) and Pat Delany. Even the kids were veterans. Willie Aames went on, of course, to fame and later infamy on EIGHT IS ENOUGH and CHARLES IN CHARGE before getting his act together and creating BIBLEMAN. Most recently, he appeared on the voyeuristically entertaining CELEBRITY FIT CLUB. The real star here, though, is Helen Hunt who, instead of posing for PLAYBOY or knocking over liquor stores like many former child stars went on to win Oscars and Emmys! A well produced and enjoyable family show, the series lasted only one season.
More later! There were lots of forgotten series in the seventies! Pictures today came from Vincent Terrace’s TELEVISION 1970-1980.
Posted by Booksteve at 9:34 AM