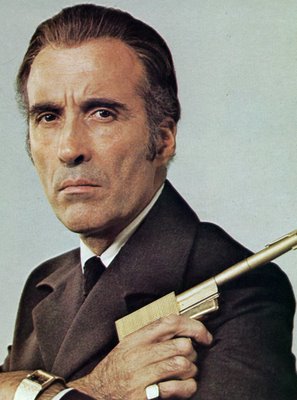 A longtime favorite here at the Library is actor Christopher Lee whose autobiography (the revised 1998 British version), TALL, DARK AND GRUESOME is seen below. Often a rather stodgy actor if we’re being honest but his screen presence is absolutely unbeatable and always a treat. Is there a thespian who has played more iconic characters in film than Lee? Once worried that his filmic legacy would only be as Count Dracula, the tall, elegant octogenarian actor has also appeared memorably as Dr. Fu Manchu, the Mummy, Frankenstein’s monster, Rasputin, Dr. Jekyll (and his alter ego), Scaramanga (THE MAN WITH THE GOLDEN GUN), Lord Summerisle in my all time favorite movie THE WICKER MAN, STAR WARS’ Darth Tyranus, Tolkein’s Saruman, and both Sherlock and Mycroft Holmes! Add to these a small role in Olivier’s Oscar-winning HAMLET, a gay biker in SERIAL, Rochefort in Richard Lester’s THREE MUSKETEERS trilogy, a dozen mad scientist types, a gunmaker in the UK western(!!) HANNIE CAULDER, both male and female overdubs for the classic M. HULOT’S HOLIDAY and scores of other scene-stealing parts in movies, TV, cartoons and even video games and you have one of the most fascinating careers any actor ever had!
Although I first saw Christopher Lee in DRACULA, PRINCE OF DARKNESS in 1966, strangely on a double bill with Adam West’s BATMAN, I really became aware of him when I discovered FAMOUS MONSTERS magazine in 1969. 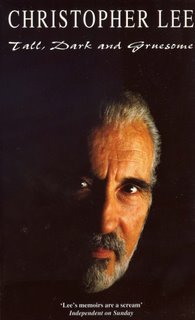 Nearly every issue had photos or articles about Lee and new movies with which he was involved. In fact, one issue had a photo feature that really caught my attention. A regular letter writer to FM, one Bill Cobun from Ft. Mitchell, Kentucky was such a fan of Lee that he announced in a FangMail column that he had named his son after his favorite actor. Ft. Mitchell, Kentucky? Why, that was right down the road from where I lived! During a visit to the Ackermansion, FM editor FJA actually arranged to have Lee call new father Cobun on the telephone and had the event photographed.
Actually, most folks probably considered it a boring piece as it literally consisted of just a few photos of the well-dressed actor talking on the phone. To me, presumably because of the local connection, it became a feature that I would remember for years to come.
In fact, in the late 1990’s, nearly three decades past that issue, I was managing a bookstore near Ft. Mitchell, Kentucky when one day I took a charge card from one…Bill Cobun. My brain’s filing system being what it is, I immediately said to this total stranger, "You don’t happen to have a son named Christopher do you?"
"Yes," he replied with a puzzled look, "Where do you know Chris from?"
"You are NOT going to believe this," I told 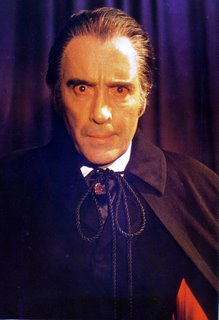 him. His mouth fell open as I related the tale of my memory of the FM article and he laughed. I got little work done the rest of that day as we wandered off into a corner and discussed that phone call and what grew into a long friendship with Forrest J. Ackerman. (In fact, at that time he told me he had recently attended with FJA the funeral of Ackerman’s friend Anton LeVay, the notorious head of the Church of Satan!) He spoke of how wonderful and gracious Lee had been during their conversation and how he had continued to be a major fan.
I never met Christopher Lee Cobun but Bill Cobun came in a number of times after that before his own passing and he always shared great anecdotes about his association with FAMOUS MONSTERS magazine and one of the nicest, most famous monsters of them all, Christopher Lee. There are a lot of actors (particularly recent ones) whose work I enjoy but whom I doubt I’d care for if I met them in person. By all accounts a true professional and a true gentleman, I really wish I could meet Christopher Lee.
Posted by Booksteve at 7:43 PM