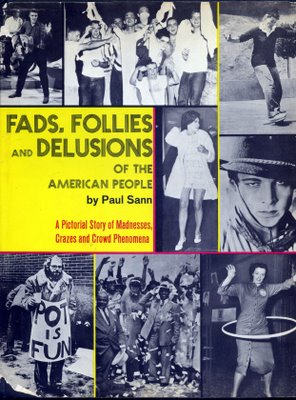 Here’s the book we discussed here yesterday, FADS, FOLLIES AND DELUSIONS OF THE AMERICAN PEOPLE. Along with its aforementioned extensive coverage of BATMAN, it offers a number of other interesting sections that make it well worth finding.
SUPERMAN, for example, follows the Caped Crusader’s chapter and features more attempts at psychoanalyzing the existence of the character. More straightforward recaps then appear for Hopalong Cassidy, Zorro, James Bond and Davy Crockett. Real life folks (I know Crockett was real but it wasn’t the real one that caught on!) who spawned fads or crazes include Billy Graham, Aimee Semple McPherson, Timothy Leary, Rudy Vallee, Elvis Presley and Billy Sunday.
Barbie is covered as are rock and roll music, hippies, panty raids, skateboarding, dance marathons, diets, chain letters, Ouija boards, hula hoops, long hair, miniskirts, the quiz show scandal, Valentino’s funeral and goldfish swallowing! This book is all over the map! My favorite piece is a particularly damning section on Dianetics which, at the time, the author had every reason to believe was a thing of the past as it had been widely discredited. Little could he have suspected the comeback L. Ron Hubbard was staging for his faux science self help book (and yes, I HAVE read it). All in all, you’ll find some interesting and rarely seen photos here, some quotes you simply won’t find anywhere else (see yesterday’s BATMAN story), some bizarre and little noted history and a strange look at the burgeoning counterculture of the sixties from a somewhat more conservative stance. Check your local libraries or used bookstores for 1967’s FADS, FOLLIES AND DELUSIONS OF THE AMERICAN PEOPLE by Paul Sann.
Posted by Booksteve at 8:17 AM