Sarah T-Portrait of a Teenage Alcoholic

In 1975, Linda Blair appeared in her second "teenager in trouble" TV movie, a genre that she looked to be specializing in for awhile (along with, oddly enough, Eve Plumb!) SARAH T., PORTRAIT OF A TEENAGE 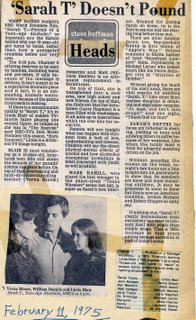 ALCOHOLIC is a powerful, moving story that avoids alot of the preachiness associated with this type of film both before and since. William (1776, ST. ELSEWHERE, CAPTAIN NICE) Daniels co-stars along with a pre-Jedi Mark Hamill. Here's the original newspaper ad, TV guide listing and a review from February of 1975.
Posted by Booksteve at 9:35 PM