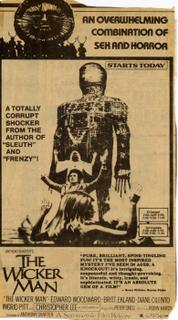 In 1981, I, your humble librarian, made the first of several appearances as a contestant on an experimental TV game show entitled SCREEN TEST. While that in itself is a fascinating story, today we're dealing with what I answered when the host inquired as to my favorite movie. In retrospect, I should have gone with a classic or at least something then current. After all, this was television. I should have catered to the masses. Instead, I told the truth. My favorite film was, and is, THE WICKER MAN. I then took up about five minutes attempting to explain it succinctly.
When it first came out...barely in the US...I paid little attention to it. It wasn't until a few years later when the legendary film magazine CINEFANTASTIQUE devoted nearly an entire issue to it's greatness and it's legendary travails that I added it to my rather eccentric list of FilmsIalwayswantedtosee. As you can see from the newspaper ad here, it did finally play in my area...but I still missed it! I eventually saw a "restored" version at a rep house theater and later managed to get this long...but still incomplete...version on tape from a rare cable appearance.
You see, that's just it. By the time it was only a few years old, THE WICKER MAN was very nearly a "lost" film. Designed as a vehicle for Christopher Lee who was tired of silent but menacing appearances as Dracula, the film was written by Anthony Schaffer who had scripted Hitchcock's FRENZY and the popular play and movie, SLEUTH. As such, it was bound to be a puzzle and it is. The plot falls neatly into place (well, to be honest, how neatly depends on which version you're watching) but takes a number of twists along the way. The intelligent screenplay works on multiple levels as it educates the viewer about pagan ritual and custom. The more you learn as the film goes on...or the more you bring to the film in the first place...the more it all falls into place. Pretending to be a standard mystery story, Edward Woodward, later known on American TV as THE EQUALIZER, is a Christian Scottish police sargeant investigating the 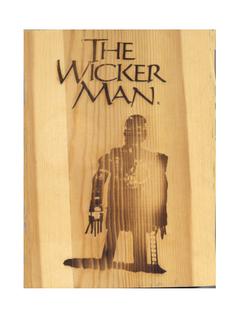 reported disappearance of a young girl at a self-sufficient Pagan community located on beautiful but mysterious Summerisle...where things are not as they seem. Are they?
Unexpectedly THE WICKER MAN, directed by Robin Hardy, is filled with great photography, beautiful songs and score and quite a bit of philosophy. Who is the villain here? Lord Summerisle, charismatically played by Christopher Lee with the wildest hairdo of his long and splendored career? By the end of the movie, your perceptions may change. The picture celebrates sexuality in a way no other film has and yet the only actual sex scene is between two snails! You'll remember Britt Ekland's (and her body double's) nude scene but note also her lovely performance here. It's all just...well...unexpected! The film's ending, although telegraphed by the title and led to almost directly in the picture, is still a shock the first time you see it! An amazing, unique horror film.
The saga of THE WICKER MAN's problems is covered in some depth in the documentaries on the special DVD release (which contains the original theatrical version as well as the better, restored, corrected version) as well as in a book that we don't yet have here at the Library. It is a cult film among horror fans and is praised in Neo-Pagan circles. The soundtrack sells well now that it has finally been released and, as with just about every classic movie, somebody thinks they can do it better as it is curretly being remade with Nicolas Cage as the policeman and Ellen Burstyn (!) as a variation on the Lee character. Hopes are not high but who knows? I didn't think I'd like the original at first, either, remember?
Posted by Booksteve at 8:03 AM