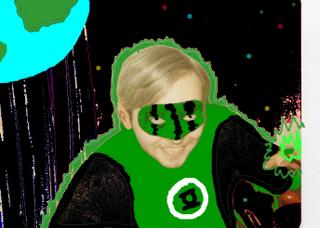 At left is a picture of me taken about twenty years ago, photoshopped into a picture of Green Lantern about a year back. It was an early effort with the software so be kind. Anyway, the first letter I ever wrote was to a 1966 issue of GREEN LANTERN. Yesterday, while picking up the aforementioned SIMPSONS extravaganza, I also picked up DC's incredible SHOWCASE GREEN LANTERN, a 9.95 volume featuring 500 or so pages that reprint GL's three initial try-out issues as well as the first 17 issues of his own title! A considerable amount of this early stuff (not being able to afford the expensive Archive editions) is stuff that was new to me. Incredibly innocent and fun, you can tell writer John Broome is feeling his way with the scripts and characters and you can watch Gil Kane's artwork blossom as the book goes on. ( I met Gil Kane once and he looked exactly like a Gil Kane drawing!) So much fun! Over the years , they've screwed with the character of Hal Jordan probably more than any other major super-hero. I really can't even look at the "current" version but, you see, that's the beauty of it! Now that DC has jumped on the inexpensive, telephone-book sized reprint bandwagon, I don't have to look at it! I have the good stuff right here! Thanks, DC and special thanks to Mssrs. Broome and Kane, et al. wherever they are.
Posted by Booksteve at 9:28 AM