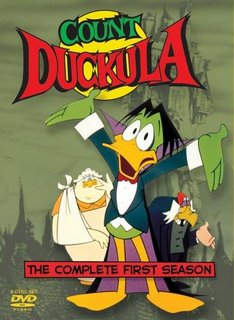 New here at the Library this week is COUNT DUCKULA-THE COMPLETE FIRST SEASON. This show from the late '80's-early '90's was a spin-off of Cosgrove-Hall's popular British cartoon series DANGERMOUSE (also released recently in a first season set) and yet the humor was a bit more old-fashioned and dry. The premise is that you have a vampire (a duck but that's actually beside the point) who is accidentally revived with catsup (or ketchup. Pick your poison) and becomes a vegetarian. He travels around the world in his portable castle along with his trusty butler, Egor and Nanny, a not-quite-all-there version of Mary Poppins if she wrestled with the WWF. In their adventures they encounter new friends and strange relatives as they try to stay one step ahead of the "hero" vampire hunter (whose voice is reminiscent of Paul Frees' Ludwig Von Drake and Peter Sellers' GOON SHOW characters!) Uniquely animated, this is lots of fun for kids and adults who appreciate real humor in their animation!There were 65 episodes of COUNT DUCKULA made over a period of five years so there WILL be more forthcoming!
Posted by Booksteve at 12:42 PM