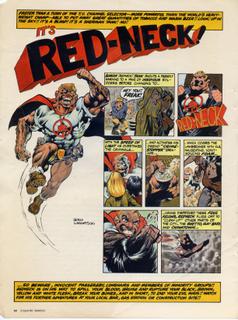 Mike Sterling's Progressive Ruin recommended picking up this year's BART SIMPSON'S TREEHOUSE OF HORROR that features, among other cool things, Bernie Wrightson and Len Wein's Simpsonized parody of their classic SWAMP THING! Well, I did and that got me thinking back to that 1970's issue of ESQUIRE where top comic book artists of the day were reportedly asked to create the heroes of the future. Here we have Berni(e) Wrightson's supposed take on that theme. I don't know...seems to me like Wrightson wasn't really taking the task seriously. I also have to wonder (and I know I could check the dates but I'm not really that interested) if ol' Bern had seen underground artist Larry Welz' CAPTAIN GUTS, a series about a very similar looking "hero" who got his power from beer and fought hippies, women's libbers, minorities and other perceived threats to conservative society at that tim 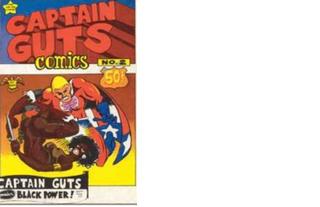 e. Welz left his rather limited character behind when he came up with CHERRY, a sort of dirty underground ARCHIE series. Proving that sex sells, I believe CHERRY is STILL published occassionally today, having outlived the undergrounds by decades. As for ESQUIRE, you may never see it if you only frequent comics shops but I understand that it continues to sell reasonably well (after some seventy years I believe) in the non-geek outlets.
Posted by Booksteve at 8:11 AM