OF MUNSTERS AND OLD FRIENDS 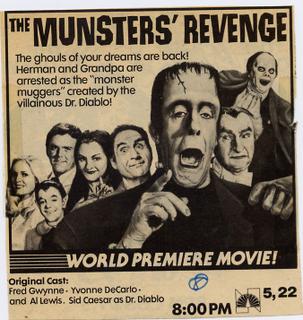 was a 1981 TV movie that came 15 years after MUNSTER GO HOME appeared in theaters and before the first of several “revival” series. The really cool thing here was that the great Fred Gwynne, after years of fighting his “Herman Munster” image, agreed to play the role again and does so marvelously. His Herman is such a likable lummox and such an incredible creation! None of the imitators who have taken on the role since have been able to fully achieve the bizarre sense of humanity that Gwynne somehow brought to what by all rights should have been a one dimensional role.
In the years since the TV series ended, (and on up to today!) Al Lewis had pretty much never stopped playing his role as Grandpa! Fred and Al together are so much fun to watch here. They function as a monstrous modern day Laurel and Hardy as they deal with the otherwise ludicrous plot that has comedy legend Sid Caesar creating robots in a wax museum for some such reason. Who cares? The attraction is the amazing chemistry between Herman and Grandpa. Certainly Fred Gwynne was a brilliant actor who deserved better than to be remembered as JUST Herman Munster but, like Karloff before him, he brought much more to that role than was written in the script.(One of my favorite Gwynne roles was in Ray Bradbury’s ANY FRIEND OF NICHOLAS NICKELBY’S IS A FRIEND OF MINE which I believe was an Afterschool Special). THE MUNSTERS’ REVENGE usually airs in October so keep an eye out! It isn’t great but it is fun!
Of special interest to me are two of the TV film’s co-stars. Ezra Stone (pictured in 1991) appears as one of the bad guys and Bob Hastings is the family’s visiting cousin, the Phantom of the Opera! My wife and I met both of these fine gentleman character actors through the Old Time Radio Conventions in the 1990’s so it is somewhat amazingly cool to see them on TV since I can say I worked with them, too! Stone was best known as radio’s typical teen, Henry Aldrich but grew into a prolific TV director perhaps best known for his credits on LOST IN SPACE and…THE MUNSTERS! Hastings was Archie Andrews in his radio incarnation but is probably remembered most for his TV roles on McHALE’S NAVY and ALL IN THE FAMILY where he owned the bar that Archie Bunker eventually bought! On the original MUNSTERS, he sometimes did the voice of the raven in the clock. I appeared opposite these two men in re-creations of THE ALDR 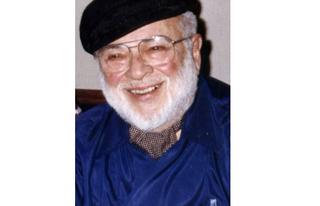 ICH FAMILY and an abridged radio script version of George S Kaufman’s YOU CAN’T TAKE IT WITH YOU in 1991. Ezra Stone was scheduled to be the guest of honor at another Cincinnati show a couple years later but died a month before the show. He was replaced by 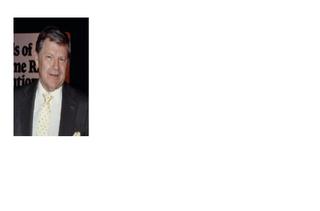 Bob Hastings. Bob went on to become a mainstay of the convention and is heard in reruns as the voice of Commissioner Gordon in Paul Dini’s long-running BATMAN animated series. Bob turned 80 this year. I remember watching him as a kid on TV and in Disney films such as THE BOATNIKS and NO DEPOSIT, NO RETURN and I’ve now acted beside him onstage more than a dozen times. My eight year old son saw him on a WONDER WOMAN rerun and said “There’s Uncle Bob again!” This year, we’re going to watch for THE MUNSTER’S REVENGE to air again. It may not be classic TV but it’s visiting with old friends and that’s always a good thing!
Posted by Booksteve at 5:04 PM