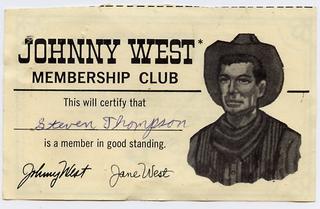 Johnny West was the flagship character of Marx Toys' Best of the West line of cowboy action figures. I guess I got Johnny and his horse Thunderbolt in 1965 or 1966. Obviously, this was long after the real TV cowboy boom of the 1950's but I would have been six or seven and Westerns were still hot and not quite yet spaghettified. That year, I also got Chief Cherokee. Over the next few years, the line kept growing with the rest of the West family, more Indians, some cavalrymen, that stalwart hero(sic) General Custer, and lots and lots of horses including the fully posable Comanche (who, quite frankly, wouldn't stand up for more than two seconds). Ultimately I got about 50 to 75 percent of the dolls (Excuse me! Action figures!) but the problem was finding a place to keep them. It got to the point where you couldn't take them all outside to play with because you were too exhausted to do anything but pack 'em back up once you finally got 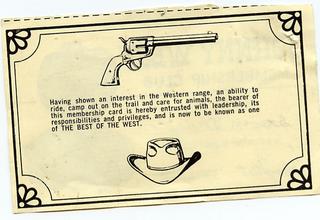 out there! The horses alone took up a whole toybox. At one point my entire dresser top looked like a livery stable! Like all good things, Marx exploited it until it wasn't so good anymore. Sometime in the mid seventies, I traded all of my Best of the West figures to a guy in exchange for some old ADVENTURE COMICS. Actually, I kept a couple of the beautifully molded horses but even those have now gone away. All I have left is this lousy paper membership card which got you even less than the Archie Club card did!
Here's a link to a keen site with pictures of ALL of the Best of the West toys, pardner!
Ran's Realm Marx Johnny West Best of the West
Posted by Booksteve at 8:14 AM