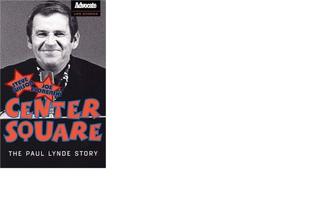 I swear to God, long after I knew what “gay” meant, it never occurred to me for a second that the late comedian Paul Lynde was gay. Most people seem to feel that he was the most obviously “outed” performer on television in the sixties and seventies (I always gave that honor to puppeteerWayland Flowers, myself). I even researched Lynde for my nigh-legendary, unpublished book of cartoon voice actors in the late eighties and still didn’t have a clue! A new arrival at the Library this week is CENTER SQUARE, THE PAUL LYNDE STORY, a smallish but detailed warts-and-all bio put out by the gay lifestyles magazine, THE ADVOCATE. This, along with the recent TV biography, reveal Paul to be a sad, troubled man whose talents for making people laugh were rarely utilized to their fullest. There’s quite a bit in the book about Paul’s annual returns to appear onstage in summer stock in his native Ohio. I never saw him there but I DID see his fellow HOLLYWOOD SQUARES co-stars Karen Valentine and Rose Marie (along with future star James Naughton) and their after show bull session with the audience was completely dominated by questions about…Paul Lynde. From cartoon voices to game shows to BEWITCHED reruns, you’re STILL making me laugh, Paul! I hope you’re happy these days.
Here's an incredible site with scores and scores of rare, hilarious clips of Paul Lynde!http://paullynde.info/clips.htm
Posted by Booksteve at 7:48 PM