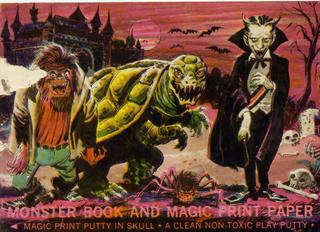 This was from an early seventies Silly Putty knock-off that came packaged in a skull...which I subsequently painted red and which still resides here in the Library. I love the art but can anyone tell me definitely who did it? I see traces of Jack Davis (the vampire) and Wallace Wood (the spider and the skull) but I'm sure it isn't by either of them. This leads me to guess that it's by Howard Nostrand who made a career of ripping off one EC artist after another. Anyone know for certain?
Posted by Booksteve at 2:34 PM