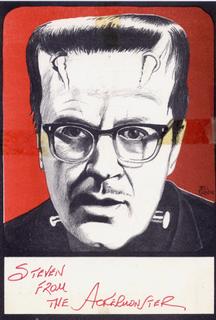 The first celebrity autograph I ever got was that of Forrest J Ackerman, editor of FAMOUS MONSTERS magazine and, love him or hate him, one of the single most important figures in the history of science-fiction, horror and film collecting. I'm not going to rattle off FJA's accomplishments here. Look 'em up on the 'net if you're curious. Still, he presented classic horror films and their stars to those of us (mostly male and under the age of 18) who religiously followed his mags.

As new horror films developed in the sixties and seventies, FM tried to cover them but somehow it didn't work. From ROSEMARY'S BABY to THE EXORCIST to FRIDAY THE THIRTEENTH, these new movies were more visceral, more violent and more often than not, rated where the mag's target audience couldn't get in to see them in the first place! (Okay, we all know we really could. Let's not go there.) Forry kept falling back on his vast treasure trove of photos and lots of reprints of articles on Karloff, Chaney Sr. and Lugosi. Long before 1980 , FM, once at the forefront of the sixties monster and the seventies nostalgia crazes, had itself become an anachronism.

Forry continued being Forry and, despite personal setbacks seemed to thrive on that as he welcomed fans to his "Ackermansion" museum. In 1986, this biographical tribute book was published, highlighting Forry's influence on everyone from Ray Bradbury and Stephen King to film directors like Spielberg and John Landis. The cover was a re-creation of the very first FAMOUS MONSTERS cover but this time, instead of publisher Ji 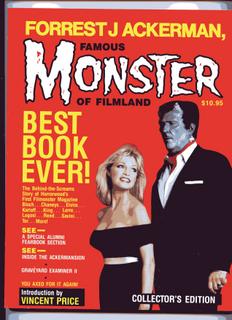 I forget the exact circumstances that led to my getting this nifty little Bill Nelson illo of FJA as "The Ackermonster" (something to do with an FM contest, I know) but, as excited as my 13 year old self was at the time, I find myself questioning that it's anautograph at all! I mean, even presuming that Mr. Ackerman, himself touched pen to paper here...HE DIDN'T ACTUALLY SIGN HIS FRICKIN' NAME!!!! Seriously! "Ackermonster" is NOT a name!!! Awww, maaaan! 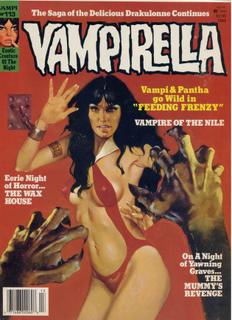 Oh well, the geek in all of us can forgive dear old 4SJ for, along with his many other storied accomplishments, he also created VAMPIRELLA, the half naked vampire lady from the planet Drakulon. Of course the early Vampi stories, lighthearted froth drawn in a somewhat cartoony style by the late Tom Sutton were a far cry from the intricately illustrated Jose Gonzalez pieces reprinted in the issue pictured. This issue, by the way, is the rare, overpriced Harris one shot from 1988, long after the Warren issues and long before the later Vampi comics glut.

Oh, by the way, did you note the "half naked" line above? Fairly quickly, characters in VAMPIRELLA (and later her "brother" mags, CREEPY and EERIE) became completely naked and yet no one ever questioned teenage boys buying these mags as they were, of course, comics and as we all know...comics are for kids! Hehehehe! Thanks, Forry!
Posted by Booksteve at 8:11 AM