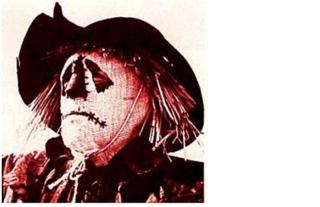 Fellow blogger Chris over at Jart in My Head touched on THE SCARECROW OF ROMNEY MARSH back on October 9th. This was Disney's 1963 remake of the early George Arliss talkie, DR. SYN based on books by Russell Thorndike about a swashbuckling Robin Hood-like smuggler in eighteenth century England who doubles as a mild-mannered vicar by day. 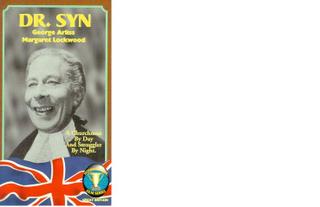 The Arliss film is a talkie all right. Not much action but a lot of talk. Veddy stiff uppah lip and all that, dontcha know? At 69, the actor was far too old for the role (Although he lived another eight years this was his final film)of the former pirate Captain Clegg who protects his small village and sticks it to King George whenever possible.
In 1962, Hammer films remade the film as CAPTAIN 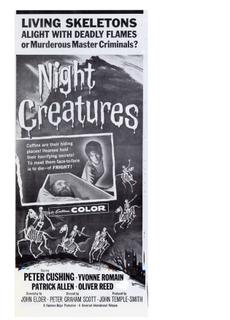 CLEGG (in this country NIGHT CREATURES) with Peter Cushing perfectly cast. As an actor, Cushing could easily do meek and mild (as in his Doctor Who films) or cold and calculating (as in his Frankenstein films) and here he was called in to be all of those in one picture. The smugglers in this wore cool skeleton costumes rather than Scarecrow outfits, perhaps in deference to the concurrently filmed Disney version.

Patrick Mcgoohan was cast in the Disney remake. Already a well-known actor, Mcgoohan projected a cold exterior in every role, aided by the fact that, in real life, he refused to ever kiss a leading lady as his wife might not like it. This probably killed any chances of his being a true leading man but led to an eclectic career in which he created and starred in THE PRISONER, perhaps the most cult-worthy TV series of all, played Hollywood villains in films such as SILVER STREAK and appeared as the guest killer on more episodes of COLUMBO than you can shake the proverbial stick at!

THE SCARECROW OF ROMNEY MARSH aired in three parts several times on the TV show in the early sixties. My guess is that it was originally planned as a continuing series within the series a la' SWAMP FOX and ELFEGO BACA. My 8 year old son and I watched it recently and he was impressed by the Scarecrow mask and scared by the maniacal laugh. An edited (by nearly half) version appeared in theaters in the early seventies as DR SYN...ALIAS THE SCARECROW, usually on a double bill with Disney's TREASURE ISLAND. There was also a brief comic book version (with great Dan Spiegle art!) in the sixties and some other merchandising in the seventies. More recently on the web, you can purchase replicas of the charcter masks in the show. Here's a link to a really obsessive website that can get you even more info: The Reverend Dr Syn, the Scarecrow of Romney Marsh
Posted by Booksteve at 2:42 PM