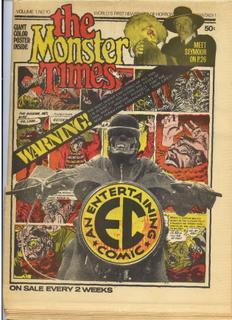 Filling the gap between Forry Ackerman's pun-filled FAMOUS MONSTERS and Calvin Beck's artsy, pseudo-intellectual (and all-too-infrequently published) CASTLE OF FRANKENSTEIN in the 1970's came THE MONSTER TIMES, a tabloid newspaper fanzine that longed to be...and sort of became a real magazine!

THE MONSTER TIMES covered classic horror and sci-fi films, modern releases, foreign genre films, comic books and strips and most other aspects of pop culture. Written by a who's who of fan/pro writers including Don Thompson, Ron Haydock and Mark Evanier, TMT was the first place I learned about EC Comics! Other frequent contributors included film critic R. Allen Leider who went on to write, among other things, SEXCAPADES(1982), that rare porn film that's both funny and enjoyable on more than the most base level. Editors included Joe Brancatelli, the Gary Groth of his day (I email corresponded with Mr. Brancatelli a couple years back and he said it all seemed like a million years ago and he was surprised I could recall thosed ays in such detail.) and Allen Asherman who would write THE STAR TREK COMPENDIUM among other genre-related books.

Artists whose work was showcased, either in strips or in articles, included Frank Brunner, Neal Adams and, of course, Jack Kirby, whose DEMON series debuted at that time. In the illustration here we have what is probably the very first publication of then 13year old Joe Jusko, known these days for his genre paintings, paperback covers and particular 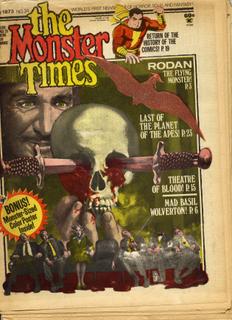 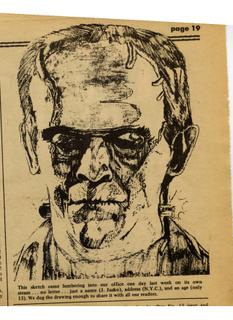 Probably inspired by Alan Light's THE COMICS BUYERS GUIDE (TBG, now CBG) and/or the comic strip newspaper, THE MENOMONEE FALLS GAZETTE, TMT duplicated their fold-over tabloid format, albeit with color covers and centerfolds. At first available only through fan circles or by mail order, THE MONSTER TIMES eventually did appear on newsstands but its odd format kept it away from similar mags and probably cut into its sales. For some reason, (changing staff, budget cuts?) the quality fell eventually and issues seemed padded with dull, pointless features such as a long non-fiction piece on Transylvania. Still, as FM was floundering and CoF was struggling, there was always the TIMES to keep us interested. Those were the times...of THE MONSTER TIMES.
Posted by Booksteve at 11:18 AM