In the late sixties, while our older siblings were into CSN and Hendrix, most of us ten year olds were hooked on a soap opera! Not just any soap, mind you, this was the unique, bizarre and downright cheesy DARK SHADOWS. DS began as a "gothic" serial about a hapless heroine and her run-ins with mysterious strangers and ghostly apparitions at an old mansion in New England.
The kids started watching after they added a vampire and began systematically working through the horror cliches. They had a ghost, a werewolf, a Jekyll/Hyde character, a Frankenstein-like monster, a Dorian Gray plot and even a Lovecraft rip-off! For many of us, this was our first exposure to HP! Time travel became a staple and the series would spend months in parallel universes allowing the same repertory company of actors to consistently play different characters! Genius! All the while on a budget and timetable that allowed for no retakes when lines were forgotten, when propmen tripped through the background or when cardboard headstones swayed in the breeze of the studio fans. The music was memorable and led to several singles and a bestselling soundtrack album! The acting was u

sually over the top. Jonathan Frid as the good/bad vampire Barnabas Collins had been trained in Shakespeare. Grayson Hall had appeared with Richard Burton in NIGHT OF THE IGUANA, Joan Bennett was a real living legend of old Hollywood. They all did their best but no one would probably consider this their finest moments.
Enter the movies. HOUSE OF DARK SHADOWS was a streamlined version of the original Barnabas storyline only with no need for the character to "turn good", he remains a traditional evil bloodsucker here. Freed from his coffin after more than a century, Barnabas insinuates himself into the modern day Collins household at spooky Collinwood and proceeds to plan a wedding with the woman he feels must be the reincarnation of his lost love, Josette.
The film is moody, atmospheric and much bloodier than the TV series but offers all of the actors a chance to show what they could really do. Frid is quite charismatic onscreen and other actors like Thayer David and John Karlen are shown to good potential. Both of the latter went on to successful character actor careers after DARK SHADOWS with David's best role arguably being as the definitive Nero Wolfe in a pilot movie and Karlen (who chewed the scenery constantly on the soap!) getting an Emmy for TV's CAGNEY AND LACY.

Since the series was still airing five days a week while the film was shot, the TV version had to concentrate on a storyline without any of the main characters for months! Barnabas was supposedly chain 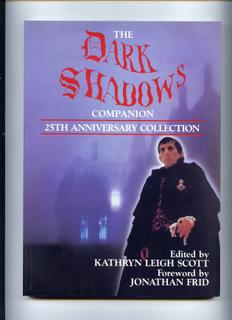 ed in his coffin during this time as I recall. After he got out, additional cast members were carted away to do the semi-sequel, NIGHT OF DARK SHADOWS. Although an acceptable film, this one was a franchise killer as few of the performers played their trademark TV roles in the picture. David(Quentin Collins) Selby, by this time a teen idol on TIGER BEAT covers monthly, appeared sans-sideburns as "Charles" Collins. His wife was played by Kate Jackson whose first role had been as a mute ghost on the TV version. The all-new plot dealt with the coniving Angelique, the beautiful but evil witch portrayed by Lara Parker both here and on the serial. It was roundly ignored and hopes of continuing the franchise on the big screen went with it. The series itself had soon run its course, also, and we ten year old boys, now twelve or so, were moving on to discover twelve year old girls.
Kathryn Leigh Scott who played Barnabas' love interest in the movie formed her own publishing company to put out a DS memoir. This led to several more DS books and a number of conventions and reunions. The series became popular on video and the Sci-Fi channel and was revived in an all new big budget version on one of the networks!
Notice above however, the picture of Frid as Barnabas guest starring on an episode of the long-running TV kids' show, BOZO THE CLOWN. There were also DARK SHADOWS comic books, a newspaper comic strip, plastic models, toys, games and a long-running and virtually unreadable series of paperback novels! DS may never have been intended for kids but that's the audience it got and for one brief period it was absolute magic...if you were ten.
Posted by Booksteve at 1:49 PM