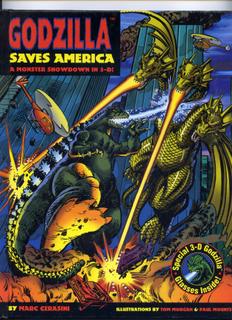 It wouldn't really seem like Monster Month without an appearance by "the Big 'G'". Here we have a 1996 book from our children's department here at the Library, GODZILLA SAVES AMERICA...in 3-D yet! Now personally, I've always found 3-D to be a bit of a joke. Sort of like the Emporer's new clothes thing. No one wants to admit that it doesn't exist! At least I've never seen it!
Anyway, this was part of a brief attempt at making Godzilla a hero in kids' books. Although there were only a few books published (this one is hardback but most were Golden Book style paperbacks)they stayed in print for several years. Well illustrated by one time Marvel artist Tom Morgan and Paul Mounts, now known for his art and coloring in Marvel's ULTIMATES line, the familiar story of giant monsters attacking is told well for young readers by Marc Cerasini (WOLVERINE:WEAPON X). I doubt you'll find this one at your local comic shop but maybe your local Library will have it. Hah! When I was a kid, libraries wouldn't be caught dead with Tarzan, Dick Tracy or Godzilla. Now my local public library has all of those and has ordered the DVD of Rob Zombie's HOUSE OF 1000 CORPSES! In the immortal words of Don Ameche, in Shel Silverstein's script to David Mamet's film of the same name..."Things change."
Posted by Booksteve at 7:45 AM