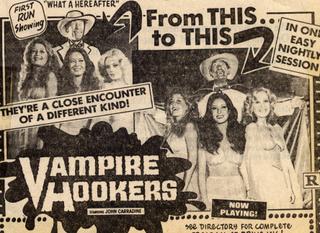 VAMPIRE HOOKERS was released in 1978 and was just one of a long series of schlocky productions that prove that the legendary John Carradine never turned down an acting job. Known variously as Cemetery Girls, Ladies of the Night, Night of the Bloodsuckers, Sensuous Vampires and Twice Bitten the releasing company tried everything they could to get your money for several years afterward. If, like myself, you enjoy schlocky Grade Z films as much or more that the Grade A stuff, then try it. We post the ad here to ask simply: Doesn’t the blonde on the right look much better in the “After” shot?
Posted by Booksteve at 10:53 AM