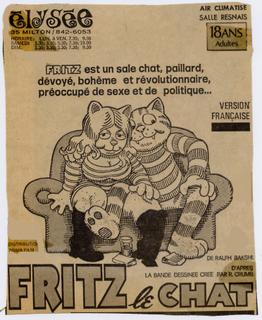 For many people who were around in the early seventies, their first exposure to Fritz the Cat was probably through the incessant, tittilating radio commercials proclaiming "He's X-rated and animated!" Now, at the time, the term "X-rated" did not necessarily mean porn. MIDNIGHT COWBOY was X-rated and won the Academy Award in 1969! MYRA BRECKINRIDGE was rated X. At the time, it merely meant that the film dealt with adult issues or themes in an explicit manner and was not meant as entertainment for children. In point of fact, very few (if any!) actual porn films were even submitted to the ratings board. The later spurious Triple X rating being self-imposed largely to differentiate these films from more mainstream adult movies. At least cartoons were...most people thought...still for kids!
Enter Ralph Bakshi, a former Terrytoons animator who had worked with Producer Steve Krantz on many of the well-remembered mid-sixties SPIDER-MAN cartoons.
We have FRITZ THE CAT on VHS here at the Library but owing to my soon to be nine year old son, it's been years since I've had an adult moment to watch it again. It's my recollection, however, that it is a professionally done piece satirizing the sex, drugs, rock and (mostly)politics attitudes of the radical leftists of the early seventies. It was hardly the first "X-rated" cartoon and certainly not the best (Consider Bakshi's later HEAVY TRAFFIC for that honor).What I find most interesting, however, is 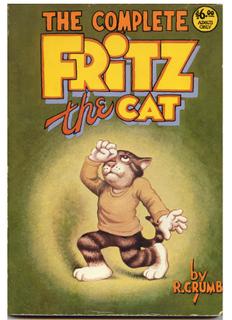 the ripple effect that it had.
First of all, in case you didn't know, I should mention that FRITZ was based on stories by the now legendary underground artist, Robert Crumb. Crumb immediately disavowed the film and went on record as being less than a fan of Bakshi's. Fritz was a very personal thing to Crumb, having originally been an anthropomorphization of his family cat, Fred. The character appeared in homemade comics, Harvey Kurtzman's HELP magazine and later in a series of different comix. As Crumb became more involved in the counter culture, Fritz discovered sex and drugs and politics, also. Still, in spite of the fact that portions of Bakshi's film were near perfect adaptations of Crumb's strips, the cartoonist opted to quite literally kill off his version of Fritz after the movie's release.
This did nothing to prevent a sequel, THE NINE LIVES OF FRITZ THE CAT. For his part, like a composer/conductor offering his own interpretation of another composer's work, Bakshi, too, had finished with Fritz and had no part of the sequel.
Television animation during this period reached on all-time high on the Blandometer, culminating in horribly written, non-violent, sickly sweet, barely moving, badly voiced but NICE cartoons for pre-schoolers and FRITZ THE CAT was a revelation to the next generation of animators. The influence of FRITZ and Bakshi can clearly be seen in groundbreaking cartoons such as THE SIMPSONS and particularly REN AND STIMPY but ultimately in even more mainstream series such as FAIRLY ODDPARENTS.
Bakshi, himself, after a mixed bag of feature films, scored well by a return to Terrytoons and MIGHTY MOUSE.
Except for the extremes in subject matter, Bakshi's once outrageous animation style has finally become mainstream. Crumb, while his legend has certainly grown, has perhaps not influenced society nearly as much as his interpreter! Here's a link to cartoon historian Mike Barrier's legendary series on Bakshi's film: MichaelBarrier.com -- Funnyworld Revisited: The Filming of Fritz the Cat, Part One
and a link to a whole page of FRITZ ads and such from MovieTome: Fritz the Cat - Movie Tome
Posted by Booksteve at 2:05 PM