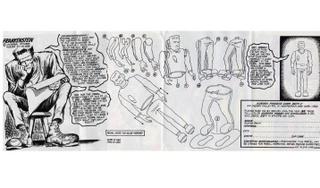 Aurora models are fondly remembered by all sixties geeks. Frankenstein, Dracula, Batman, Wonder Woman. Aaahhh! Then, in the early seventies, Aurora created MONSTER SCENES. Touted highly with full page ads in comic books of the era, the concept here was snap together models (modeling glue had been given a bad reputation by that point as a drug), new (Doctor Deadly) and familiar (Vampirella of all people!) characters and sets in which innocent youngsters could have hours of harmless fun. Here's an online link to the catalog: Aurora Monster Scenes Catalog . The sets included a working pendulum, a hanging torture cage and a laboratory. Oh, did I forget to mention that one of the models was "The Victim," a scantily clad young maiden designed solely to be tortured and perhaps killed by the monstrous main charact 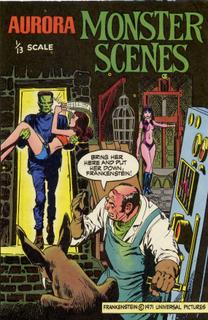 ers that also included Frankenstein's monster (here, as often happens, simply referred to as "Frankenstein")? Kids LOVED this stuff! Seriously, dude! This was all the rage and certainly better than the PREHISTORIC SCENES that followed a year or so later when Aurora (at the insistance of new parent company Nabisco) had pulled the MONSTER SCENES due to complaints. Of course, we didn't hear about all that at the time. Here's a link to a site that explains it all pretty well: MONSTER SCENES . Apparently everybody from Gloria Steinem to Ralph Nader complained!
Anyway, perhaps the coolest part was that the comic book insert included with each model kit was drawn by the then Deity-like Neal Adams. The inserts themselves were all the same but the instructions inside offered their own little individualized comic tales of the characters, again Neal-illustrated. Above you'll see the one for Frankenstein. I've seen a couple other online but I couldn't find them today. We have them here at the library so we may end up posting the rest ourselves.

I have to say that the only childhood acquaintance I know that ended up torturing women (I read it in the paper some years later) was NOT one of those of us who were into the MONSTER SCENES. As far as I know, we all turned out fine. Geeky, but fine!