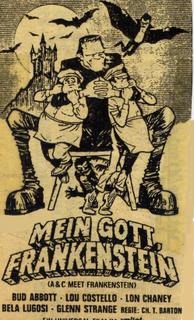 Here's an unusual, German cartoony ad for ABBOTT AND COSTELLO MEET FRANKENSTEIN. Looks like the lettering from Mel Brooks' YOUNG FRANKENSTEIN so I presume this to be from a seventies rerelease designed for a quick buck cash-in.
Arguably the best A and C picture and a better horror film than the two or three films in the Universal series that immediately preceded it, this 1948 picture marked the second and last time (and the first in seventeen years!) that Bela Lugosi, so closely identified to this day with the role of Count Dracula, actually played that role onscreen. Unfortunately, in spite of the film's success (which led to more "Meet the Monsters" films for the comedy duo, Lugosi's career received no boost and it was all downhill from here. In a couple of years, he would meet Ed Wood.
Lon Chaney, Jr. is Larry Talbot, the Wolfman, with that marvelous Jack Pierce make-up and Glenn Strange, with next to nothing to actually do, mind you, looks suitably monstrous in the Frankenstein Monster's make-up. In fact, I always thought Strange looked even better than Karloff! Even the Invisible Man appears...or doesn't... for a cameo via the voice of Vincent Price. If you see only one Abbott and Costello movie...well, honestly, it should probably be BUCK PRIVATES but if you're up for a second, make it ABBOTT AND COSTELLO MEET FRANKENSTEIN!
Posted by Booksteve at 2:22 PM