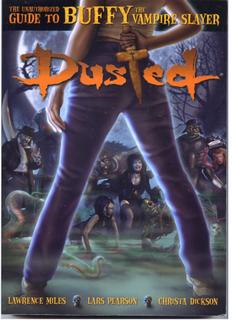 I love BUFFY THE VAMPIRE SLAYER! It's not a crime. Many people are obsessed with this marvelously delineated program. Best-selling novelists Nora Roberts and Jennifer Crusie are known to spend their bestseller bucks on BUFFY toys and memorobilia for example.

That said, the "Official" Buffy TV show tie-in book ultimately turns out to be multiple padded volumes. Several "unofficial" single volumes leave much to be desired. Then there's DUSTED!

The word unauthorized is right there on the cover which explains why you not only have zero pics inside but also the "vampires" on the cover feature Elvira and Darth Vader rip-offs instead of Spike, Angel or the Master.

Once you accept that lack of official sanction, however, DUSTED is an obsessive BUFFY fan's dream! Every season is a chapter, every episode a seperate listing. Each listing features firsts/lasts, demons, glitches, best lines, continuity notes, trivia, what it's REALLY about (strangely, many people see BUFFY as a show about a girl hunting vampires! Hah!), love (and sex)notes and a running tally of deaths.

There's also subsections about how many tattoos the characters (as opposed to the actors) have, the BUFFY novels, the songs in every episode, comics and even BUFFY on the Web! All in all, the ultimate fan book on the series...and they cover all seven seasons in one reasonably priced volume that can STILL be purchased or ordered. If you're a BUFFY fan, I recommend it completely. If you're a Nora Roberts fan...get word to her about DUSTED!
Posted by Booksteve at 3:51 PM