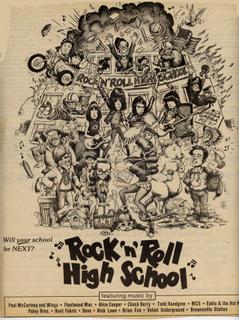 Bob Dylan warned us that the times they were a’changin’. Sometimes we forget that they continue to do so. Last week, I checked out the nifty DVD of ROCK ‘N’ ROLL HIGH SCHOOL from my local public library!!! I’m sorry but there was one brief shining moment where this 1979 Roger Corman produced cheapie was the epitome of anti-establishment anarchy and now here it was in the public library! I first saw it at an early eighties revival and enjoyed nearly every minute of it. It has a kind of an underground comics feel to it, played up by this busy poster by sometime underground artist (and dinosaur expert) Bil Stout.

The plot is incidental but deals basically with the kids at Vince Lombardi High, led by almost a big star P. J. Soles (STRIPES, HALLOWEEN), clashing with the new principal (a scen-stealing turn by Mary Woronov). During the course of this clash, the principal decides that the problem is the music…notably the music of The Ramones, the seminal seventies American punk group who are shown in the film as Beatles-like idols. This leads her to burn the kids’ records which leads the kids to get The Ramones to come to the school.

Sounds almost old-fashioned when you just describe it, doesn’t it? Along the way, though, you enjoy Woronov’s longtime co-conspirator, Paul Bartel as a converted teacher, veteran comedian Grady Sutton in one of his final roles, TV vet Vince Van Patten as the hapless (and clueless) hero, Ron Howard’s weird brother Clint in what is easily his best performance as the school’s go-to guy, brainy ingenue Dey Young and the coolest soundtrack of its day! And that doesn’t even include the exploding mice!!!

The film opens with a beautiful original ballad by Paul McCartney entitled DID WE MEET SOMEWHERE BEFORE. This is, of course, the theme song to the then-recent Warren Beatty comedy, HEAVEN CAN WAIT…or rather it should have been. Paul was trying his hand at writing film themes in those days but they were all rejected ( his lovely theme for SAME TIME, NEXT YEAR turns up on bootlegs a lot, also.) The song was NOT on the original soundtrack album, though, and unless it appears on a more recent CD release, remains officially unreleased to my knowledge.
It’s a nice touch to have McCartney on the soundtrack of the film, however, as The Ramones supposedly took their nom-de-rock from a pseudonym that Paul rather famously once used, Paul Ramon. I’ll be honest with you, I had never even heard of The Ramones when I first saw this movie. I was living, more or less, in Cincinnati where Mark Twain once said that everything arrives ten years later than in the rest of the world. In the early eighties, we were just getting disco. To me, though, they turned out to be the best part of the picture! They were cool looking and they could rock better than anything I’d heard in years! I wanted the film’s concert sequence to go on longer! In fact, now the whole concert appears on the DVD!

IMDB has a whole bunch of trivia on ROCK ‘N’ ROLL HIGH SCHOOL here: Trivia for Rock 'n' Roll High School (1979)
Star P.J. Soles never quite made the big-time but became a cult star. She has been immortalized, in fact, in the title to an album by the group Local H, "Whatever Happened to P. J. Soles?" This very weekend, in fact, she’s appearing (along with at least one of the actors who played the principal’s "flunkies") at a horror convention in California bizarrely headlined by O. J. Simpson!!
Clint Howard has had a strange internet talk show, one episode of which featured Johnny Ramone. Here's where to find it: The Clint Howard Show Clint often nepotistically appears in more successful brother Ron’s films.
I believe VinceVan Patten became a tennis player but he is currently better known as a celebrity poker player!.
Dey Young continues to work as a character actress. Perhaps her best role in recent years was as Shirley Jones in THE DAVID CASSIDY story opposite Malcolm McDowell as David's dad, the great Jack Cassidy!
Paul Bartel and Mary Woronov appeared as a team so often that people thought they were married. They weren’t. He was gay. Their magnum opus was undoubtedly the cult classic EATING RAOUL. Bartel died in 2000. Here's Mary's classy website:Mary Woronov: The Website
The Ramones, of course, are now considered the most important band of the seventies and continued to pump out high energy rock ’n’ roll for two decades before the members started dying off. Most recently, they’ve been celebrated with this bizarre but incredible Rhino box set, WEIRD TALES OF THE RAMONES featuring 3 CD's, a DVD and a graphic novel of Ramones stories by various comics creators...including the aforementioned Bil Stout!! Ramones - Weird Tales Of The Ramones - at Rhino
Finally, director Alan Arkush went on to do music videos and to make GET CRAZY, if anything an even better movie with the same "underground" sense of humor and a bigger cast that includes Malcolm McDowell, Bobby Sherman(!) and Lou Reed…as Bob Dylan!!! As I said, the times they are still a’changin’ but the public library still doesn’t have this one. Guess I’ll have to settle for my own library’s aging VHS copy for now.
Oh, well. Gabba Gabba Hey!
Posted by Booksteve at 8:56 AM