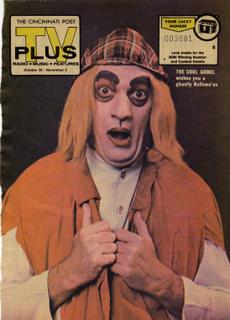 From Ghoulardi to Zacherley, horror movie hosts were all the rage in the late fifties-early sixties. Mark Twain rather famously indicated, however, that everything happened ten years late in Cincinnati. Thus it was that the Cool Ghoul arrived on WXIX’s SCREAM-IN circa 1970. Dick Von Hoene played both the Ghoul and his unseen sidekick, a disembodied Karloff voice, as he punned his way through a mix of classic horror films and low-budget fifties monster movies. SCREAM-IN became one of the young (it went on the air in ’68) UHF station’s most popular shows, prompting a non-Ghoul spin-off, CREATURE FEATURE.

The Ghoul himself became such a popular figure in the area that the show and the station couldn’t contain him. Before long Von Hoene was putting on his ugly make-up for commercials and public appearances and for a few years the orange wig look was very popular in this area around Halloween!

My one encounter with the Cool Ghoul was thankfully in broad daylight. It was the last day that Cincinnati’s Coney Island amusement park was open, 1971 I believe, and they were going out with a bang offering popular local celebrities all day long including Cool, as he was called. With his trademark loud mock-Lugosi laugh and a ridiculous tongue roll that every kid tried and failed to duplicate, he was easy to find, signing giant black and white posters (Being 12, I later colored mine!) for hundreds of mostly boys who crowded around him.
Scream-In, with its already outdated title, soon faded and Dick Von Hoene who doubled as an Ohio-accented (NOT a pretty sound) newsman on the station, ended up with just his day job. But the Cool Ghoul would not die! He still turned up in commercials and every Halloween he would be trotted out on some current talk or news show for a pun-filled interview. In 1981, I found out my first adult girlfriend’s mother had dated Dick Von Hoene years earlier!

In the 1990’s, Von Hoene was hosting a local cable talk show entitled NORTHERN KENTUCKY MAGAZINE. On two separate occasions, my wife and a friend appeared on his show but both times he was on vacation leaving them to be interviewed by his female co-host. He never left the Cool Ghoul far behind, however. Like the aging KISS, the makeup covered a lot of sins and Cool continued to rise every Halloween, a few years ago even receiving a new half hour cable special!

Dick Von Hoene died suddenly a couple years back and his death was followed by weeks of glowing tributes that undoubtedly would have surprised the man. These included one final cable special filled with vintage SCREAM-IN clips that hadn’t been seen in thirty years! Horror hosts are widely celebrated on the web but the Cool Ghoul, if mentioned at all, is only a footnote. Not so in Cincinnati, however. In Cincinnati, he’s Cool!
Posted by Booksteve at 7:39 AM