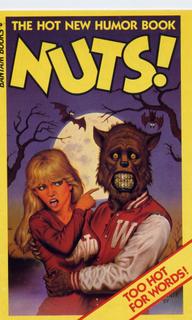 Harvey Kurtzman is one of my idols. If you're reading this and you don't know who Harvey was, then stay tuned as I plan on writing a lot more about him soon. For now, though, just a quick look at one of Kurtzman's lesser-known projects, NUTS!, a MAD-style paperback series done for teens in 1985 through the late Byron Preiss' company and Bantam Books. If I recall correctly, it ran only two volumes. We have them around here somewhere at the Library. Seen here is actually the advance promo flyer that featured several pieces from both of those volumes and was distributed through bookstores several months prior to the books themselves. Various artists appear including Christopher Browne and Sarah Downs. The project is nowhere near Kurtzman's best work but it was great to see a burst of creativity near the end.
Posted by Booksteve at 9:33 PM