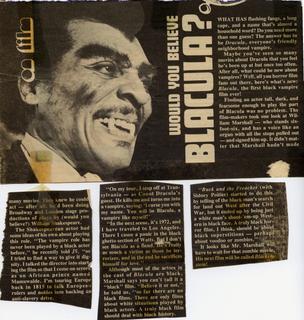 This clipping is from a 1972 issue of Junior Scholastic, one of those in-school magazines that still proliferate to this day. BLACULA is a better film than it perhaps should be and that's probably due to star William Marshall.
Marshall was a classically trained actor who played Shakespeare on Broadway and sang Grand Opera. There's a wonderful 1964 episode of BONANZA in which Ben Cartwright pays to bring a great opera singer to town and, along with the rest of the town, is stunned to find that he is black. Marshall brings an immense dignity to that role and carries that into BLACULA years later (as well as its sequel, SCREAM, BLACULA, SCREAM). Contrary to the article's conclusion, he would not appear in the dreadful BLACKENSTEIN.Among his other roles of interest to our audience, though, he was the second King of Cartoons on PEE-WEE'S PLAYHOUSE, Dr. Daystrom on the STAR TREK episode, "The Ultimate Computer" and the voice of Iron Man on SPIDER-MAN AND HIS AMAZING FRIENDS. Sadly, this underrated actor died of complications from Alzheimers in 2003. Check out his IMDB listing at William Marshall (I) and watch for his appearances. In a better world, William Marshall would have been a superstar!
Posted by Booksteve at 9:00 AM