Here's a movie I really wanted to see but as far as I know it's never even turned up in "collector circles." (Nudge, nudge. Wink, wink). That said, I 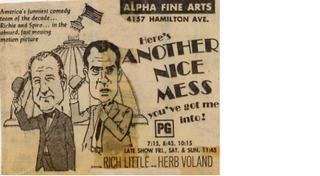 can't help but think it's one of those concepts that seem much better than they turn out to be. I saw impressionist Rich Little tour with Suzanne Somers in 1981 and I have no doubt he could do Nixon. Voland, one of my favorite character actors of the period, actually bore a resemblance to Agnew. Dated 1972, this would've all been pre-Watergate so the humor may well have been lighter than if it were made even a year later. IMDB (Another Nice Mess (1972)#comment) lists the writer/director as Bob Einstein, aka Super Dave Osborne, brother of Funniest Man Alive candidate Albert Brooks. The producers are Tommy Smothers (the real brains behind the Smothers Brothers)and Jonathan Haze, star of the original LITTLE SHOP OF HORRORS!! IMDB also lists t 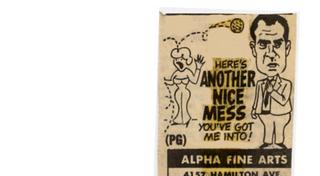 he running time as a scant 66 minutes. Yep. Gotta be a real turkey.
Poor Rich. He also appeared in Orson Welles legendarily unfinished THE OTHER SIDE OF THE WIND and the quintessential lost sixties film, THE PHYNX, which allegedly fell victim to the sale of Warner Brothers to the Kinney Corporation which eventually led to AOL/Time-Warner. Of course, THE PHYNX is circulated among collectors and we have it here at the Library so maybe soon we'll do an in-depth analysis of it. It's also "another nice mess."
Posted by Booksteve at 7:27 PM