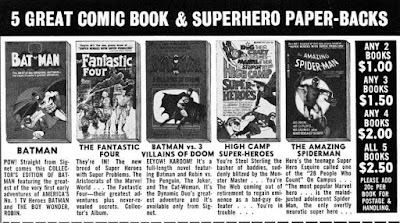 Here's a 1966 ad for 5 super hero paperbacks trying to cash in on Batmania! The first is, of course, an obvious choice. BATMAN reprinted 1950's stories of the Caped Crusader but featured an unwisely retouched Infantino Batman cover (the right leg has been essentially removed)that makes it look as though our hero is about to fall flat on his cowl. The other Bat-title, BATMAN VS. THE 3 VILLAINS OF DOOM may look like a novelization of the Bat-movie but it isn't. Ghost-written by former Fawcett editor/writer William Woolfolk, it's actually one of the strangest versions of Batman ever--a serious attempt at telling a serious story with the high camp trappings of the TV series! Speaking of high camp, HIGH CAMP SUPER HEROES pulls no punches. They are cashin' in buddy! Period! These are reprints of the shamelessly overwritten and overplayed Jerry Siegel stories of Archie's ultra-heroes like the jobless Shield and the henpecked Web. Much of the art is from veteran Paul Reinman. The Marvel titles with FF and Spidey have the coolest covers, the most pure nostalgia value and the most important reprinted stories of the bunch! These were only the tip of the paperback iceberg that led to tons more reprints, novels and novelizations of all the great (and many not-so-great) comics characters! 1966 was a great year to be seven.
Posted by Booksteve at 8:55 PM