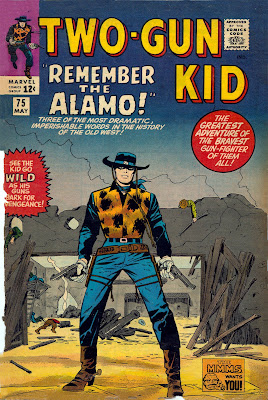 Been on a cowboy kick lately. Been enjoying some old spaghetti westerns and figured I'd try some cowboy comics, too. The problem is that I've always found the vast majority of western comics to be virtually interchangeable. Oh, I enjoy the art on some--Joe Maneely, Jack Kirby, Jack Davis and even Al Williamson in the fifties. Doug Wildey on THE OUTLAW KID and much later, RIO. All the different versions of Dick Ayers' GHOST RIDER. The one 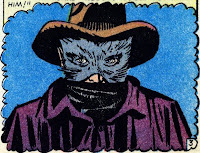 I always gravitate to, however, is the TWO-GU 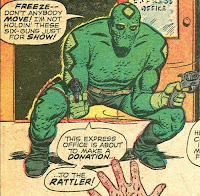 N KID. I've always attributed this to my initial exposure to the character in the marvelous and funny parody of the strip in NOT BRAND ECCH!

For many years a generic cowboy, ol' Two-Gun was reinvented by Lee and Kirby in the early days of the Marvel Universe as a sagebrush super-hero. He was now a masked rider with a sidekick and a secret identity. Secretly, he was frontier lawyer Matt Hawk with a sidekick named Boom-Boom, a big cigar chomping bald guy who always wore 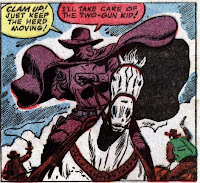 a top hat. Since Boom-Boom was often seen with Matt as well as aiding Two-Gun, it's unclear as to how the residents of the Old West weren't able to put two and two together.

Superheroes, as we all know, inspire supervillains and Two-Gun had his share. Along with run-in's with Jesse James, Billy the Kid, Cole Younger, Geronimo and other real-life western legends, he fought a number of supervillains. Hurricane was a frontier Flash who could draw as fast as he could run. There was also the Fox, the Panther, the Rattler, Roaring Bear, the giant Indian with super strength and the Hulk-like Goliath.
For the most part, the art was handled by western veteran Dick Ayers. Ayers' Kirby-style art has always looked...well...dirty to me. Guess that's why he was the perfect 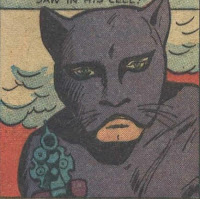 ints and eventually cancelled. It was revived a couple years later, X-MEN-like, as an all-reprint title.
The character of the TWO-GUN KID was officially brought into the Marvel Universe and came into the modern day to join the AVENGERS at one point. More recently he had some Captain America-like moments as a man out of his time in SHE-HULK. Beyond that, the Marvel Universe degenerated into th

e evil alternate reality it became and I have no idea what happened to him. Every once in awhile though, I hear someone ask, "Who was that masked man?" and I just want to answer, 'THAT, sir...was the Two-Gun Kid!" 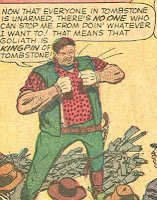