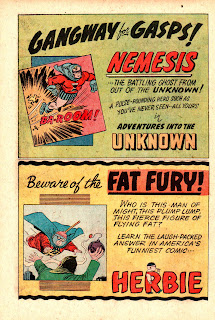 If you had told me ten-twenty-years ago that here in the new century one could purchase hardcover reprints of the American Comics Group characters Nemesis, Magicman and Herbie (two of which are seen in this vintage ad) I would have called the guys with the butterfly nets. All three were written by Richard Hughes under various pseudonyms and they were all a little over the top. In the case of Herbie, of course, that's putting it mildly. Still with art by, respectively, Chic Stone, Pete Costanza and Ogden Whitney--talented veterans all--these series were a cut or two above similar fare from other companies in the mid-sixties. There's a quirky charm to them that could only have come from the quirky ACG company. I've always enjoyed them myself. That said, I STILL can't believe they're reprinting them in hardback editions!
Posted by Booksteve at 12:25 PM