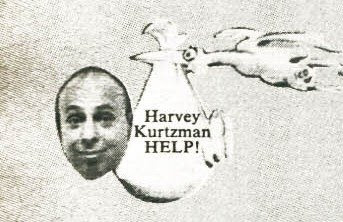 This is a subject that deserves a bit more depth and perhaps I'll get around to that some day. Perhaps I'm overstating my point, also. I don't know, though. The more I think about it the more I think that Harvey Kurtzman was THE most influential person on twentieth century pop culture. You decide:

In the 1950's, Harvey Kurtzman created a series of historically accurate war comics that took an unprecedented anti-war stance. these comics were marketed to impressionable children. These children a decade later would be draft age during the Vietnam War and presumably anti-war. Thus Kurtzman influenced the growth of the sixties anti-war movement.

Also in the 1950's, Kurtzman created MAD. MAD promoted many of the so-called "sick" comics of the day and later influenced the sense of humor of several generations. It also influenced the growth of the anti-establishment movement of the sixties.

In the early 1960's, Kurtzman created HELP. HELP sought out new talent and became the first mainstream publication to print Robert Crumb, Gilbert Shelton, Jay Lynch, Joel Beck and many others of the early Underground Comix movement of the late sixties.

Kurtzman's assistant editor on HELP was Gloria Steinem. After learning how to run a magazine, she would go on to become the most prominent public figure of the women's movement in the early 1970's and the founder and editor of MS. Magazine.

Ms. Steinem's replacement as Kurtzman's assistant at HELP was a young cartoonist named Terry Gilliam. At one point, a young actor visiting New York from the UK, John Cleese, was hired for a photo feature in the mag and he and Gilliam would remain in touch, eventually co-founding Monty Python. Cleese would go on to become an elder statesman of comedy while Gilliam would become known as a controversial epic film director.

In the mid-sixties, Kurtzman and Will Elder began Little Annie Fanny at PLAYBOY, offering sexy political and social satire and, in effect, influencing every young lad who ever snuck a look at his father's dirty magazines and, in theory, making adult material more acceptable for subsequent generations.

Thus Kurtzman can arguably be given at least part of the thanks/blame for the anti-war movement and the eventual downfall of President Johnson it precipitated, the mainstreaming of the women's movement and the fight for the ERA, the anarchistic and artistic aspects of the counterculture, the changing sense of humor in America and the world and its influence on movies and television over the past few decades as well as society's gradual acceptance of adult entertainment!
Posted by Booksteve at 7:14 PM