Here's the trailer for SKI PARTY from 1965. This was probably the first of the "Beach Party" films I had seen and thus will always hold a special nostalgia for me. 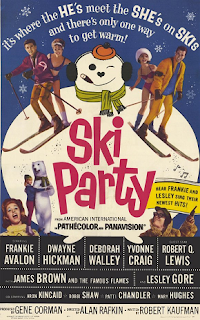 We didn't have beaches where I lived but we certainly had snow so I could relate. Although not a great film, SKI PARTY (a teenage variation on the basic premise of SOME LIKE IT HOT) has a lot going for it. The combination of Frankie Avalon and the ever-droll Dwayne Hickman works well, Deborah Walley and future Batgirl Yvonne Craig are both cute and sexy, Annette appears in a fun cameo and there's even some real music. Lesley Gore literally stops the show long enough to do her then-current "Sunshine, Lollipops and Rainbows." Then, in one of the oddest cameos of all time in my opinion, James Brown (with his then back-up group, the Famous Flames) shows up. Seems all these whiter than white kids are lolling about the ski lodge with all of this white, white, white snow outside when there's a knock at the door. "Hey everybody, it's James Brown and the Famous Flames!" Uh-huh. Brown does his signature, "I Feel Good." All in all, not exactly a winner but a pleasant diversion with some wonderful snow scenes!
Posted by Booksteve at 7:25 AM