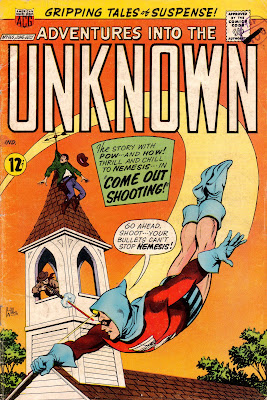 Okay, here's the answer to the Human Torch mystery from yesterday. One reader got it close by suggesting ACG. Since ACG really only had two silver age heroes--Magicman and Nemesis-- it was a 50-50 shot. The answer is...NEMESIS! That's right, Nemesis (NOT the warlock one!), a clear contender for the most ridiculously clad super-doer of them all! On the one hand, he was a clone of DC's SPECTRE, an avenging spirit from beyond who revisits Earth to use his mystical powers for good. On the other hand, his arch-enemies were known to ha 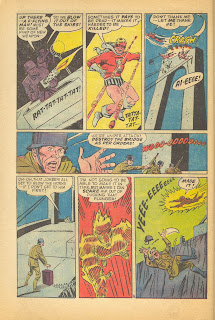 ve died laughing at his hoodie and cute li'l striped short-shorts!! He had an interesting run in the early to mid-sixties, though, with quirky stories from Richard Hughes and art by Pete Costanza, Chic Stone and, as seen on this sample cover, Lou (Kirt Schaffenberger) Wahl.


By the way, if posts are erratic over the next couple of days, it's because we're having Internet/PC issues and the repair guy can't get here until late Friday. This is the first successful log-on I've had since yesterday so I thought I'd clear up the Torch mystery before possibly going AWOL for a bit! Back soon!
Posted by Booksteve at 3:27 PM