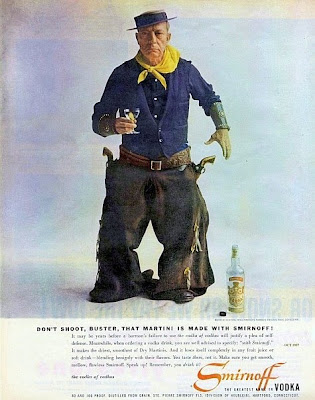 Buster Keaton's early success was ended as much by his drinking as any other problem. He had a severe alcohol problem even as he was playing teetotalers in early talkies like SPEAK EASILY and WHAT! NO BEER?. Thus it always surprises me somewhat to see so many of the great TV commercials he did in the 1950's advertising beer. Now here's an early 1960's print ad for VODKA! Go figure. At his worst, though, Keaton was still more creative and funnier than pretty much anyone he ever worked with!
Posted by Booksteve at 6:49 PM