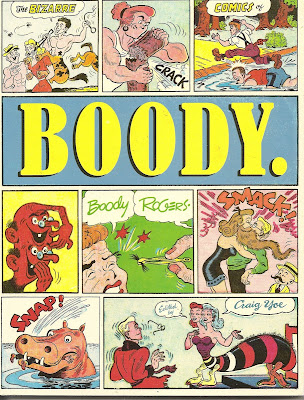 I vaguely recall seeing an interview with "Boody" Rogers in the COMICS BUYERS GUIDE back in the late '70's or early '80's (possibly with Craig Yoe) and thinking, "Ah, good! Here's some pages I can skip!" I didn't know his characters. I didn't know his work. Looked like kid stuff and I was into more sophisticated comics material like semi-naked female warriors in chain mail bikinis! In the words of Don Ameche (quoting the script by Shel Silverstein), "Things change."
The new book BOODY-THE BIZARRE COMICS OF BOODY ROGERS talks only a little about the late cartoonist, preferring rightly to let his work speak for itself. The rest of the volume consists of brightly photocopied reprints of Boody's work from SPARKY WATTS and BABE and a few one-off tales to boot! It was just last year when I finally looked twice at a Boody Rogers story and that was only because a number of pd SPARKY WATTS stories were reprinted on various blogs all around the same time. My surprised pleasure with these caused me to immediately seek out and download even more SPARKY WATTS comics!
Boody Rogers is funny as hell! He is also a good storyteller and an A list cartoonist. His sense of the surreal is played up on the cover here but that's only a small portion of his...okay, I'll use the word...genius.
SPARKY WATTS is a comic about a super hero who doesn't wear a costume. He was just selling magazine subscriptions door to door one day when a seemingly mad scientist drafted him for a cosmic ray experiment that made him faster and stronger than anyone else alive! A previous, less successful experiment had given another gentleman really, really large feet. A number of Sparky's adventures appear here in this volume.
Interspersed is BABE about a backwoods beauty with amazing athletic skills! Done very much in the tradition of L'IL ABNER, BABE is a fun character, too. My favorite story, though, is the hep-talk fueled DUDLEY-THE PRINCE OF PRANCE with its MAD-style gags and wordplay.
Rogers' art is old-fashioned bigfoot cartooning (literally in that one character's case) at its best. If one is familiar with SMILIN' JACK, the long-running aviator comic strip, one can clearly see the influence of its creator Zack Mosley but there's also a dash of Al Capp, a touch of Chester Gould and more than a little Basil Wolverton! Considering that much of Boody's work predates Wolverton's, that's one influence that probably worked the other way around!
Edited and compiled by the estimable Craig Yoe whose books of comics history are more and more becoming indispensible to any pop culture library, BOODY is a fun experience that left me wanting a volume two right away! Since most of today's comics fans like blood, guts, grit and death with their comics, BOODY might be hard to find at your local comics shop. Don't be as closed-minded as I was for nearly three decades! Order it online today!
Posted by Booksteve at 9:41 AM