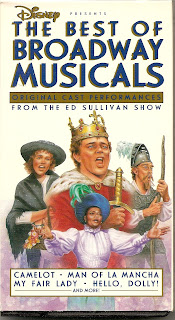 Don't know if this ever came out on DVD but here's a wonderful VHS tape from about 20 years ago that features Broadway performances that had been re-created live on THE ED SULLIVAN SHOW! Since Ed was based in New York City, it was apparently quite a simple task to get the performers on regularly. This collection features Ethel Merman from 1968, the cast of OKLAHOMA from 1955, Pat Suzuki from FLOWER DRUM SONG, Carol Channing doing "Gentlemen Prefer Blondes" from '59, Julie Andrews from MY FAIR LADY as well as CAMELOT (with Richard Burton as King Arthur!), Larry Kert and Carol Lawrence (whom I would later see in SUGARBABIES) from WEST SIDE STORY (1958), Anthony Newley doing his wonderful "Who Can I Turn To?," Gwen Verdon from SWEET CHARITY, Richard Kiley from MAN OF LA MANCHA and Pearl Bailey from her 1967 interpretation of HELLO, DOLLY!. Whew! If that's not a true "best of" I don't know what is! If you're a musical fan and want to catch some of these little seen performaces from now-legendary shows, see if you can find Disney's THE BEST OF BROADWAY MUSICALS!
Posted by Booksteve at 7:00 AM