Movies That Fell Through the Cracks # 48 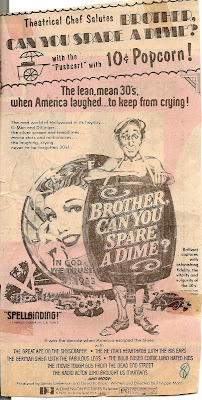 Made in 1975 but timely again due to the country's current economic woes, BROTHER, CAN YOU SPARE A DIME is a documentary of sorts. I say "of sorts" because, unlike traditional documentaries, this picture has no narration whatsoever. It is, in fact, completely made up of old movie scenes, public domain newsreel footage and music from the 1930's as it chronicles the Great Depression. Directed (or should one say compiled?) by Phillipe Mora, an Australian of French heritage, it nevertheless manages to give a fairly good and accurate portrait of how things were and how folks escaped from how things were. The Marx Brothers, Clark Gable, W.C. Fields and dozens more stars appear in both classic footage and newsreel images. The still alive then Jimmy Cagney appears practically enough to have demanded compensation for this picture! Locally, at least, it got a lot of hype with TV ads and--as you can see--a special popcorn promotion! It's out there on DVD but still pretty unknown. Director Mora had previously done the same thing exactly with a history of the Nazis entitled SWASTIKA (1973) Soon enough, though, he was doing things like the superhero musical, THE RETURN OF CAPTAIN INVINCIBLE and THE HOWLING sequels. He's still working today.
Posted by Booksteve at 5:59 AM