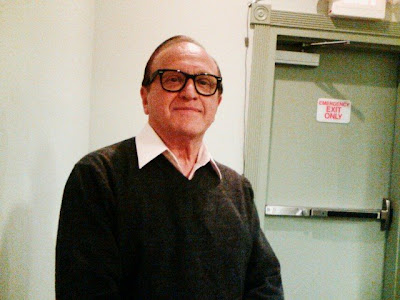 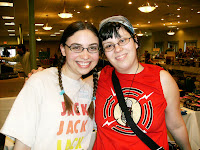 on for 2009 brought reuinions with friends old and new. Got some cool DVD's and books in the larger Dealers Room at the new Hotel (which apparently changed its name two weeks ago confusing a LOT of folks!). We all tried out for parts in the re-creations this year and I got two small roles, Rene got one good-sized funny one and even bookdave ended up with his first! It's a one-liner that pops up tomorrow afternoon! Brittany Rose (of BRITTANY ROSE AND ME fame) was only able to attend today w 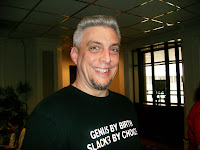 hich led to her getting no role in spite of an impressive audition. She was, however, surprised to have been recognized from her website- http://brittanyrosepictures.blogspot.com/

Away from the convention proper, we hung out with Jack Benny Superfan Karen Hughes and her family. Karen was particularly enthused about this year as the guest of honor is Benny impersonator, Eddie Carroll and she herself has been cast as Mary Livingstone in tomnorrow's re-creation! You go girl!

Eddie Carroll (also the voice of Jiminy Cricket) is as nice as his reputation (and Mark Evanier) has said. When he's wearing the glasses, his every mannerism and movement bring to mind Jack but without, I 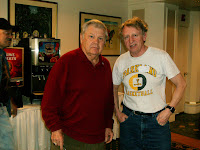 barely recognized him when I first saw him. The ever-young Bob Hastings returned, also, along with Esther Geddes McVey and too young to be so prolific author Martin Grams.

Seen here in no particular order are re-creationists Dan Hughes and Steve Jansen, Bob Hastings, Karen Hughes with lookalike Brittany Rose and Jack B....err...I mean Eddie Carroll! We hit the road for home after a long day but ran into stopped traffic that I had to maneuver around to get us to Waffle House for the first meal I'd had all day. Now it's nearly eleven and after two and a half hours of sleep last night, I need a little more before we head off at 9 AM tomorrow.
Posted by Booksteve at 10:35 PM