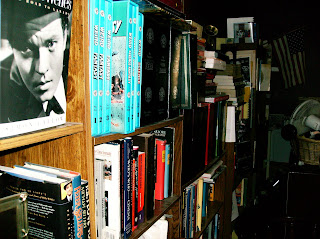 The good news is that my previous post was my 1600th one! Wow! The bad news is that I've noticed that quite a number of my earlier pre-revamp postings now have format glitches that I had not anticipated. These are generally around the pictures and lead to single words sometimes being spread over three or four lines! Ugh! This is easily fixable. However, I have chosen NOT to fix it because...well...there's 1600 posts!! There's also a glitch which causes an ad to pop up sometimes in the middle of a photo!! I don't know what the hell that one's all about! Still, I trust my readers to be able to work around those issues. Besides...like I said...1600 posts!!! Wow.
Posted by Booksteve at 7:12 AM